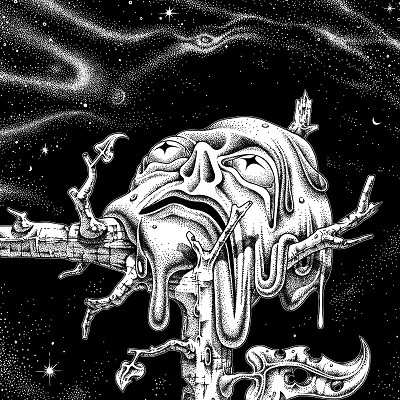 Water for the Frogs by Hooveriii

Pronounced as “Hoover Three”, Los Angeles based group Hooveriii originally started out as a solo drum machine project by Bert Hoover. Now it is a six-piece band. They created their own take of the psychedelic space-rock voyage by releasing their second release and their debut on Austin-based record label where they do the Levitation festival since 2008 called, The Reverberation Appreciation Society.

Water for the Frogs is quite a scorching release from Hooveriii. The band alongside Bert Hoover consists of Gabe Flores on lead guitar and vocals, Kaz Mirblouk on bass and vocals, James Novick on synths, Owen Barrett on drums, and Casey Sullivan on vocals and synths. Hooveriii creates their own sound of krautrock, post-rock, and prog in a genre I would like to call, futuristic tribal rock (little nod to call King Crimson that from my perspective).

It’s quite an explosive release this year. Not only it would send shivers down your spine, but you can imagine Hooveriii have taken the opportunity by going up the uncharted levels of playing this album in full maximum volume. ‘Shooting Star’ sees the band walking into the ominous territories between Aphrodite’s Child’s 666 and The Velvet Underground & Nico.

You can hear inspiration of a musical motif with a nod to the song ‘All Tomorrow’s Parties’ thrown in as the synths and guitars are crying out for the fall of a successful songwriter who had everything in his pocket, but he pays the ultimate price at the end. ‘We’re Both Lawyers’ is a driven down hypnotic groove with film-noir like riffs and raises these clues that would make you open Pandora’s box.

Once you open it, it becomes a nightmare by revealing these high-speed chases of Cluster’s Zuckerzeit while the galloping high speed chases of ‘Erasure’ feels like a spaghetti western with blood and guts that is menacing and like a snarling beast ready to attack. But it’s ‘Control’ that ignites all of the rocket fuel to hurl through the cosmos of The Seeds ‘Mr. Farmer’ with chugging guitar riffs, garage-rock fuzz organ, and swirling synths flying unexpectedly.

‘Gone’ starts with a blistering jazz drumming intro that Owen does to get the band’s engine running as they segue into these Camel-like guitar chords similar to the 12-minute epic, ‘Lady Fantasy’. It’s quite a surprise for Hooveriii honouring the unsung legends of British Prog Rock who don’t get the recognition they deserve.

But then it becomes a stick of dynamite that has exploded right in front of you in the midsection as the synthesisers has assumed control by walking into both David Sylvian’s Japan and the John Foxx-era of Ultravox whilst the sax follows the band in hot pursuit in this loop-like segment and hammering it down until the end. Water for the Frogs was a big ride that I’ve endured.

Hooveriii really took the music into unbelievable results that will keep you guessing until the end. And man, those guys know the music well, and take it up a notch with Water for the Frogs.