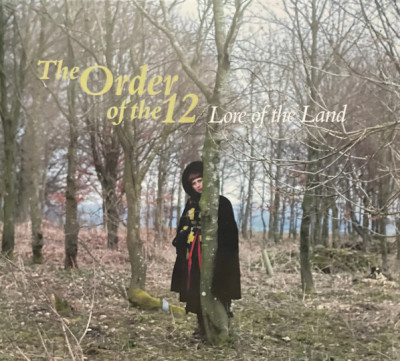 Lore Of The Land by The Order Of The 12

There’s a wonderful sense of displacement on Lore Of The Land, the new album from The Order Of The 12.  The brainchild of Richard Norris (The Grid) and featuring vocals of Rachel Thomas, the music is like some strange refraction from a Mylar photograph, distilled through and acid fried folk heritage. Taking cues from Trees, Fairport, and The Wicker Man, it evokes strange summertimes in Englands fields. Both timeless in quality, but also hugely redolent of a particular time and space, each of its ten tracks are a beautiful reminder of the stark power of folk, albeit one dropped through a lysergic haze.

With vocals that drift from the purity of Sandy Denny, to the more ethereal realms of Clannad, Rachel Thomas provides a clear focal point throughout this album, and you feel yourself drawn in to songs such as the beautiful title track. Possessing the kind of tonal quality which makes time stand still, it can be quite breathless as you dare not to breathe in case you interrupt the proceedings. Musically, the album ranges from jaunty folk of ‘The Forest At Night’, to the more esoteric wares as the songs take trips into weirder realms of acid folk. Always an accompaniment, rather than taking the lead, it drifts from the homely, to a more traditional folk approach.

By tapping into the lost sound of English acid folk, the band sound unlike anyone around else active at the moment. This provides a freshness to the music, but also a deep warmth of nostalgia. Without drifting into a maudlin copy of what has been though, there is an unnerving edge to some of the songs which seeps into your conscience when you least expect it. ‘Black Knight’ is a perfect example of where the music retains an otherworldly presence rather than sticking to the more traditional approach. This is visited again on the excellent closing track ‘Down To The Ring’, whose tolling bell feels like an invitation into some kind of horrific folk horror.

Lore Of The Land may not present anything new, but it does evoke a rather wonderful era of music. The music is superlative and bewitching, with Thomas providing some rather stunning vocals. It seems almost too brief at times, and you would like to see the band maybe stretch out a bit more into psychedelic realms. That may be for the future though, and as a debut it is an excellent release which you will want to return to time and time again.