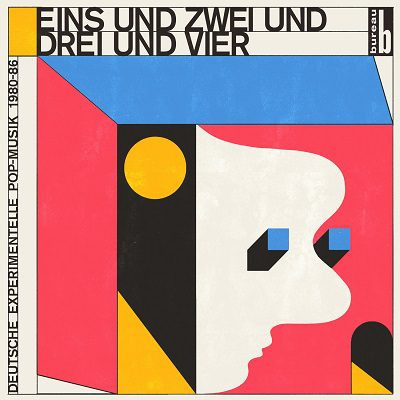 This compilation from the Bureau B label covers the eruptive sounds of the music scene in the first half of the 1980s between Cologne, Dusseldorf, West Berlin, and Hamburg. These obscure and rare gems during that time frame as the punk scene was fading and the major cities in Germany took the youth sounds by embracing the attitude. Combining synthesisers, guitars, post-punk, new wave, and elements of hip-hop rolled into one.

While they have a bit of humour in their arrangements along with serious textures thrown in, the compilation, Eins und Zwei und Drei und Vier: Deutsche Experimentelle Pop-Musik 1980-1986 takes you back in time of a place where the ‘80s was really a cool period. Believe me, if you expect to hear any of that pretentious horseshit from New Kids on the Block, guess what, you got the wrong compilation, buddy.

Palais Schaumburg’s ‘Wir Bauen Ein Neue Stadt’ is a mid-fast electro-drum beat on a loop with these click-clacking grooves combining the John Lydon-sque vocals and a crossover between Suicide and Joy Division. Dukelziffer’s ska/reggae style on ‘Keine Python’ channels The Slits. Honouring the late great Ari Up and a pre-Amy Winehouse, it takes us into Kingston as we dance in the hot, hot Jamaican sun.

P!OFF’s sense of humour with some trip-hop vibes on their cassette player breaking down unexpectedly for ‘Mein Walkman is Kaputt’ as Germany’s answer to the Soul Train dance line comes up for a groove with Der Plan’s ‘Hey Baby Hop.’ And then there’s Conrad Schnitzler who joins the 80s sound.

The track ‘Auf dem schwarzen Kanal’, proves that he’s more than just a part of the krautrock movement, but honouring the melodic styles of Kraftwerk’s Autobahn with its thumping beats to get you up-and-running down the highway as the year synth-punk zero vibes of both Xao Seffecheque’s ‘Sample & Hold’ and Asimus Tietchens ‘Höhepunkt kleiner Mann’ takes us into a circus that has gone from an amusement into a hallucinating nightmare.

You have these weird scat-like vocals and unexpected guitars that can go batshit crazy on the previous track before we enter a mad house that will make you insane in the years to come. So, be prepared on those two tracks. While it may not be your cup of coffee per se, but they can knock those doors down with a gigantic punch.

Then there’s the nod to Devo between ’78 and ’82 from Duty Now for the Future to Oh No! It’s Devo! Die Radierer’s ‘Angriff aus Schlaraffenland’ is a tip of the energy dome hats to Mark Mothersbaugh, Gerald Casale, and the late, great Conny Plank as the production channels the post-rocking synth midsections that have the three’s blessing and keeping the Spud Patrol’s legacy up-and-running.

This compilation was quite a challenging ride. Not only there are some weird and crazy tracks on here, but I always imagine Radio DJ John Peel playing these songs nonstop on his Radio 1 program for the BBC and getting listeners’ attention to prove that it what they were hearing. And no, not that pretentious fuck Rick Astley, but the sounds from Germany in the ‘80s to give someone like him the big giant middle finger!

And for Bureau B, they really knocked it out of the ball park with Eins und Zwei und Drei und Vier: Deutsche Experimentelle Pop-Musik 1980-1986. And I hope that someone like Stuart Maconie’s Freak Zone plays this to get the recognition they deserve. So if you’re sick and tired of hearing the same fucking crap of American Top 40 from that miserable shit face Ryan Seacrest, then this compilation is the one to check out.