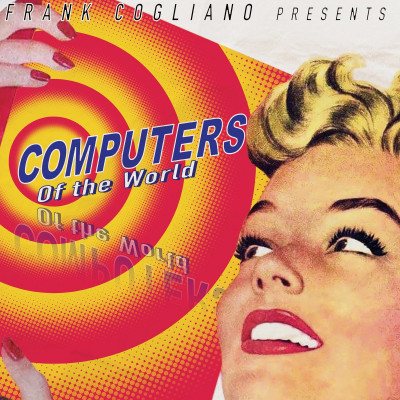 Computers of the World by Frank Cogliano

For those not too familiar with New York producer Frank Cogliano, the title of his most recent album, Computers of the World, might indicate yet another, rather anonymous electronic album.

Well, neither Cogliano nor his latest album bring us something anonymous. Actually, this producer/composer/artist has produced and composed music that has been featured in Oscar winning films and critically acclaimed TV series. He transcribed and recreated the lost score of Stanley Kubrick’s Barry Lyndon and directed a live performance of the film at the Kings Theater in Brooklyn, which and features the music of Vivaldi, Mozart and JS Bach.

Oh, and he plays a myriad of instruments, from guitar, guitarviol, bass, piano, drums, banjo, to pedal steel guitar, and many other traditional and non-traditional instruments. Playing in the Saturday Night Live band and having his own (Sugarbad) certainly helped along the way.

With so many musical avenues under his belt, it should be no wonder that Cogliano has actually come up with quite a substantial (electronic) album here.

His wide array of musical interests and capabilities have given him the opportunity to go out of  strict boundaries of any electronic music genres, touching on bases of artists who decided to do the same, think Brian Eno, Board of Canada and a few other imaginative electronic music artists.

So, why the fixation on computers? Cogliano explains: “I wrote this album in the weeks leading up to the lockdown in New York City in January – February 2020. The last moments before the world had changed. And I was thinking about my early years recording on 4 track Tascam and a Yamaha keyboard and a Squier Strat, and thinking about that time, when consumer computers and dial up internet were shaping and about to change the world. So I am digesting all of this nostalgia and finding sounds from old VHS recordings and experimenting with video art on an old Sony TV with an analog video synth and I came up with this album.”

Yet, Cogliano is not sticking solely to nostalgic electronica here, but is actually trying to push the boundaries a bit further,  reminding us of old and bringing personal nostalgia to modern times.