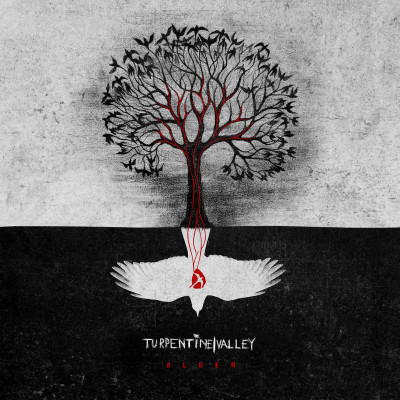 It’s fair to say that instrumental bands with a penchant for quiet-loud dynamics and soaring, cinematic melodies are no longer the daring outsiders that they once were. Ever since Top Gear started spamming the public with Mogwai songs for every generic circuit pass or overhead shot, they’ve become an increasingly unobtrusive part of the soundtrack landscape. It’s a given, then, that any bands willing to go down this route will have to either push their sound in new directions, to extremes or simply nail it to make an impression; to an extent, Turpentine Valley have attempted all three on their second full-length and it seems to have worked.

Having already come to the attention of many through their music’s appearance on legal drama The Twelve, their debut album already showed that they had both the scope to make something fit for soundtrack work while being able to stand on its own merit. In most respects, Alder fits that mould well, the subtle calm of ‘Veeleer 1’ serving as a suitably low-key prologue for the apocalyptic drama of ‘Sereen’, all thundering drum rolls and searing, tremolo-heavy riffs that snap viciously at the listener. The difference here is that the sense of conflict and emotional turbulence is more omnipresent; Roel Berlaen’s drumming in particular has a blunt, direct sense of weight behind it, adding a flash of danger and urgency.

While Berlaen is the dominant force in setting the album’s propulsive tempo, it falls on Thomas Maen to dictate much of its tone. His basswork contributes heavily to the darkness that separates Turpentine Valley from their contemporaries, a gravelly presence that dictates the emotional dips and rolls of the album centrepiece ‘Tremor’, prowling and pacing before its final, desperate roar and adding a much-need sharpness to the juddering, blunt-force battery of ‘Neuron’. Paired with Barlaen’s solid timing, the two create a balanced and surprisingly varied framework that leaves guitarist Krystof Balduyck ample space to flesh out, embellish and punctuate.

Between the thudding, downtuned post-metal clatter of ‘Sereen’s opening moments, the tremolo-heavy sigh of ‘Parabel’, a stirring exercise in sonic push-and-pull, and the simple, countrified pieces ‘Veleer 1 & 2’, which bookend the album as a whole, Balduyck seems willing to throw the whole post-rock playbook at the listener. At times, this approach comes dangerously close to mimicry of the bands who perfected, and subsequently moved on from, those tactics, yet there’s an intelligence to how he uses his tools. Paired with the band’s strong ability to craft a compelling and emotionally complex narrative without lyrics, it sets Alder up as a standout, and occasionally inspired, presence in an increasingly crowded marketplace. Available in the UK through Ripcord Records (cassette), the US through A Thousand Arms Music (CD) and in Europe via dunk!records (vinyl), there’s not really any reason to sleep on this one.