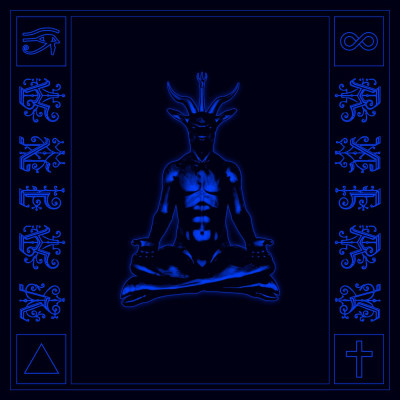 Futue Te Ipsum - Angel With Many Faces by Vaina

Done right (or wrong), black metal in a live environment is a curious beast. The theatricality, the sense of ritual and the sheer emotional intensity can stir a person to their core or reduce them to wry, mocking smirks. It’s no wonder, then, that so many bands simply don’t take that risk and commit solely to studio output. For Finland’s Vaina, their first live experience was confrontational, bizarre and a quixotic mix of genius and disaster but it did, in turn, inspire their second full-length so it can’t have been all bad.

Playing out more like an hour-long ceremony than a traditional ‘metal’ album, it feels a little cheap to call this metal at all. Rather, Vaina take an intuitive, perhaps holistic, approach to the core ethos of black metal. They see fit to cull elements from disparate realms – dark ambient, EBM, black metal and even shades of funk, hip-hop and world music – and allow them to twist and intermingle, a tentacular nightmare realm of sound and darkness, and in this way they craft something that adheres to the spirit of the genre, if not to its form.

The more obvious traits of the form are evident – screeching, animalistic howls; the sharp, metronomic rattle of blastbeats; tremolo-picked riffs that flow with an old-world sense ofgrandeur – but even at their most obvious, there’s a sense of purpose that continually pulls it from the beaten path. When synths are added into the mix, there’s something noticeably artificial about them. There’s no attempt to mould them into something more human but rather, their cold and sterile nature is embraced, allowed to twist the compositions into dreamlike journeys through the void.

These elements are sometimes given full rein, like in the pulsing EBM-oriented ‘ABOUT:BLANK’, a 4-on-the-floor banger just alien enough to fit right at home here, or used to a more chilling effect. In the case of ‘πυραμίς’, it lends the sparse piano melodies and vast, open spaces the tranquillity of being adrift at sea, or maybe more appropriately lost in space, drifting with nothing to grasp or focus on, while ‘HCN’ allows it to add colour, fleeting sparks of light among the crawling basswork and rhythmic clatter of bass drums, but it’s omnipresent and goes beyond the functional, tightly intertwining to become as integral to the music as word or melody.

To be blunt, trying to sum up what Vaina have achieved with Futue Te Ipsum is near impossible, and it feels like to do so would go against the very soul of the record. It’s a labyrinthine work, one where corridors sprout seemingly at will and serve only to draw the listener deeper into darkness, confusion and, if they are lucky, realisation. It speaks as directly to the psyche as it does to the cosmos and it’s one of the few records in recent years that feels like, no matter how many listens you give it, there will always be something more to gleam.