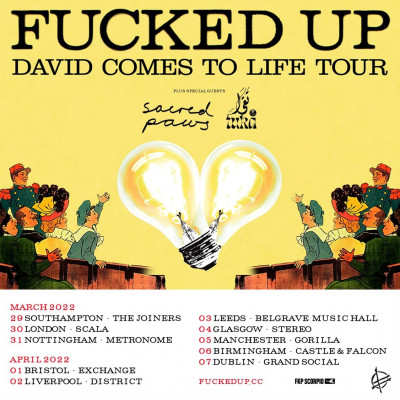 With their third album, 2011s David Comes To Life, Canadian hardcore punks Fucked Up combined the raucous and infectious punk that they had wowed with on their first two albums Hidden World and The Chemistry Of Common Life with a grander approach to their music, in the form of an eighteen song rock opera that has since become a seminal release for the band, and the news that they would be performing the record in its entirety on a full UK tour was joyous news to fans.

First up were opening band Tuka and they started proceedings for the night with a set that saw the soaring vocals of Tuka herself taking centre stage atop a series of her bands grunge-like grooves with a shoegaze vibe in the mix there too. The venue was just starting to fill up as Tuka played but they went down well and got the night off to a positive start.

Sacred Paws were up next and their upbeat set ramped the energy levels up in the venue from the start and they warmed up the, by now mainly full, venue nicely.

Sacred Paws danceable and vibrant set was fun and singer/bassist Rachel Aggs constantly enthusiastic dancing formed  the tone nicely and the bands set was received well, with the crowd warmed up perfectly for Fucked Up, with Sacred Paws giving glowing thanks to them from the stage.

As the unlikely strains of ‘Torn’ by Natalie Imbruglia fade out of the speakers, Fucked Up hit the stage with the familiar strains of ‘Let Her Rest’ and proceed to tear through the David Comes To Life album as if their lives depended on it. Fucked Up have always been a formidable live band but after a couple of years off, it seems as if they are playing as if they have just started, such is the urgency of their set.

The band has had some lineup changes with both bassist Sandy Miranda and lead guitarist Mike Haliechuk missing and with guitarist Ben Cook leaving the band last year but the stand in players proving themselves just as capable with flawless performances all round with vocalist/keyboardist Robin Hatch in particular aiding the songs with her sublime melodies, Frontman Damian Abraham is his usual formidable yet totally down to earth self and his enthusiasm knows no bounds as he belts out the David Comes To Life classics and the band look and sound as if they are having the best time back up on stage. The album is played in full and it is an amazing feeling hearing songs like ‘Queen Of Hearts’, ‘Under My Nose’ and ‘Running On Nothing’ played with an energetic lust for life.

Drummer Jonah Falco takes centre stage as he belts out ‘Truth I Know’ and ‘Life In Paper’ as the story of the album unfolds before Abraham returns on ‘Ship Of Fools’ for the rest of the albums duration.

Far from being just a standard run through of the album, Fucked Up storm through the track list and add in an extra sense of vivacity to tonight’s proceedings and the atmosphere is nothing short of celebratory. Damian Abrahams onstage antics up the ante as well and include giving a shout out to Yorkshire punk legends Geoffrey Oi-Cott, discussing Leeds curry houses and using crushed plastic bottles to fashion a makeshift mohawk and this all adds to the fun vibe throughout.

As the set ends with ‘One More Night’ and closer ‘Lights Go Up’, to rapturous applause, it is clear that Fucked Up are loving being back onstage and playing live again and for everyone in attendance, the opportunity of witnessing an album such as David Comes To Life played in full with such energy and fun has been an experience in itself.