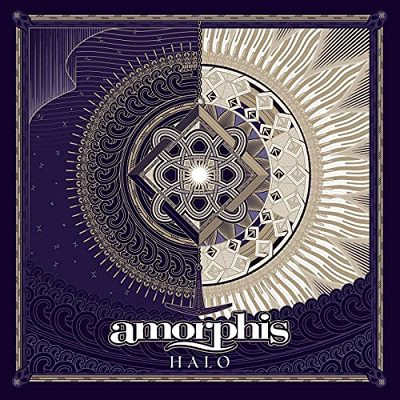 Welly, welly, welly, well. This was quite a ride that is like a turbo-powering experience waiting to happen. For Finland’s own Amorphis, who had been around for 32 years, they had taken the ingredients of melodic death metal. Mixing it in with doom and Nordic folklore to unbelievable results. Thirteen albums in the can and three EPs later, Amorphis are keeping the machines pumping out for more.

With their fourteenth studio release on the Atomic Fire label entitled Halo, they have unleashed a magnifying beast that is waiting to attack. While I’m very new to Amorphis’ music, Halo is a real killing machine for 2022. And the centerpieces that are on this album, is worth checking out.

From the exhilarating video game-like score with brutal attacks from guitars, drums, monstrous and angelic vocals on ‘Windmane’, you can hear midsections of the music from the NES classic Mega Man 2 from the 8-bit sounds of the keyboards, followed by organ, epic riffs, and blistering solo work climbing up to Mount Everest.

‘On The Dark Waters’ sees Amorphis going into the watery depths of the middle-eastern sounds from India before going into the battlefield that Jani, Santeri, Tomi, and the doubling guitar styles between Holopainen and Koivusaari head into whilst returning to the stiar-sque midsection and climatic end towards the finish line.

‘The Moon’ features some of the techniques that the Floyd and Journey did from The Division Bell and the second track ‘One More’ from their 1996 comeback release Trial By Fire. Not only Joutsen has the cookie monster vocals, but has an angelic side also.

There’s something Jekyll and Hyde about the arrangements on the third track that Joutsen goes for. He has created this characterisation of going through this mental state which is hard to get out of. With those symphonic structures that Kallio brings to the table, it becomes a clock-ticking scenario as it reaches midnight for the character’s demise.

‘When The Gods Come’ is as prog to the core by going for the jugular with battling lead sections, marching riffs, monody piano and organ sounds, followed by thunderous arrangements to get your fists pumping. The title-track is a fight for survival.

Here, Joutsen and Scardust’s Noa Gruman take turns in their vocals. In the middle of the song, Noa pours her vocalisations during the acoustic rain dropping sequence while the duo guitars return to kick the door down for Joutsen taking Noa’s hand and fly off into the night.

Paatos’ Petronella Nettermalm brings the Halo story to an end on ‘My Name is Night’. Both share a duet together as they channel the Diablo Swing Orchestra’s ‘Justice for Saint Mary’ from Pandora’s Piñata by dancing in this macabre-like waltz, knowing that the battle is far from over. While they have a long way to go to bring peace in the valley, the operatic forms leaves listeners on this massive cliffhanger not knowing what will happen next.

At the end of Halo, I wished Amorphis had turned this into a 2-CD set. Because I can imagine there’s a lot more that was left off during the recording sessions on the making of this album. But this is a real corker that the band have opened the champagne bottle to give 2022 a massive hardcore punch.