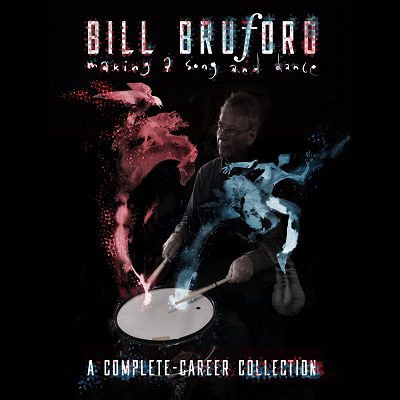 Making A Song and Dance: A Complete Career Collection by Bill Bruford

Since 1967, Bill Bruford has had an amazing career. And while he called it a day at the beginning of 2009 to enjoy his retirement, he has published his own autobiography, earned a PhD degree in Music after a four and a half year study at the University of Surrey in 2016, inducted into the Rock and Roll Hall of Fame with Yes in 2017, and launched his own YouTube page in January of this year.

Throughout his amazing career between Yes, King Crimson, U.K., touring drummer with Genesis during the Trick of the Tail tour in 1976, Bruford, and his own group Earthworks that launched back in 1986 until 2009. It’s quite an astonishing journey that he’s been through since 1967. And now in this 6-CD box set, it covers his career as a collaborator, leader, improviser, and as a guest artist.

You have the first and second CD covering his time with Yes, King Crimson, U.K., and ABWH (Anderson, Bruford, Wakeman, Howe). From the pounding journeys of the climatic 11-minute epic ‘Heart of the Sunrise’, the folky turned heavy enjoyment of ‘I’ve Seen All Good People’ and the spiritual forces on ‘And You and I’, Bruford keeps the tempos changing in unexpected changes with his time between The Yes Album, Fragile, and Close to the Edge.

But once he joined King Crimson in 1972, the rule book is completely broken. You can hear the massive eruption from the dangerous attacks from ‘One More Red Nightmare’ and ‘The Great Deceiver’, to a fast-sped car chase on the Concertgebouw version of ‘Larks Tongues in Aspic, Pt. 2’.

But once Bruford dives back into the ocean for Crimson’s return in the ‘80s and ‘90s for ‘Neal and Jack and Me’, ‘Frame by Frame’, and ‘Sex Sleep Eat Drink Dream’ with Levin, Belew, Mastelotto (THRAK-era), and Fripp, they go in for the kill. The late, great John Wetton who not only was a master on Crimson, but on U.K. he sings on Bruford’s melodic boundaries by taking listeners into the world of ‘Nevermore’.

You can feel Wetton and Holdsworth jamming together in the midsection taking turns on the instruments with Jobson’s keyboards and electronics flying into the air for some crazy synthesised improv. Discs three and four covers both of his bands that go into the world of Jazz Fusion and classical boundaries between Bruford and Earthworks.

This is where he goes beyond the prog genre to prove listeners that he’s more than just the four-letter “P” word. There’s the beautiful two-part epics ‘Seems Like a Lifetime Ago’ with Annette Peacock’s silky turned poetic vocal arrangements from beauty turned into an eruptive powder-keg on the second part with some of the crazy textures between Allan Holdsworth and Egg’s Dave Stewart taking us into these deep, dark cavernous locations, followed by Berlin’s bass lines.

Then on ‘One of a Kind’, they really get down to business into funky town. Bruford makes sure that Holdsworth gets the recognition he deserves as he shines brilliantly on his improvisational fret work by following the melodic xylophones that go through these crazy loop holes. Now, we come to Earthworks.

Here, Bill sets up the Mount Everest climb to unbelievable structures. The search for the inner self with a walk to a joyful, smoky sax improve done by Iain Ballamy on ‘Pilgrim’s Way’ and ‘Candles Still Flicker in Romania’s Dark’, followed by an ambient beauty with some tribal temperature levels rising for the ‘Temple of the Winds’, and going into another fast-spread journey into the heart of the forest between Hamilton, Clahar, and Hodgson’s fiery beats on the ‘Sound of Surprise’ with some Weather Report structures from the Heavy Weather-era.

But he returns back to the crazy time textures with unexpected changes to return to his roots in the late ‘70s with a staggering version of ‘Beelzebub’, but in a different form with a climatic end. His collaborations between Roy Harper, David Torn, Al Di Meola, Kazumi Watanabe, and the late, great Chris Squire to name a few, showcases some of his chops to give it that extra push.

The funky touches between Miles Davis, the Headhunters-era of Herbie Hancock, and Torn’s electrical loops on ‘Original Sin’ from Bruford Levin Upper Extremities, is out of this world. You can hear some of the pre-Sonar textures that Torn channels by going into some wah-wah effects that are off the wall while Botti channels not Davis but Freddie Hubbard also to follow Levin, Torn, and Bruford in hot pursuit.

But his appearance on the first volume for Burning for Buddy: A Tribute to the Music of Buddy Rich which Neil Peart produced, gives Bill a chance to shine on the walk down memory lane to tip his hat to both Buddy and the Professor on the big band swing of ‘Lingo.’ Speaking of Torn, the pounding electro-beats honouring the legendary Jimi Hendrix on a hypnotic take of ‘Voodoo Chile’, gives the prince his stamp of approval knowing his music still innovates to this day.

And who couldn’t forget the master himself, Chris Squire. Bill makes sure that Chris gets notice when he appeared on his 1975 solo gem, Fish Out of Water on the symphonic carnival approach with ‘Lucky Seven’, and the romantic return to the Close to the Edge-era with pounding piano touches by ‘Silently Falling’.

It’s quite an understatement that Bill hasn’t forgotten both Neil and Chris, knowing that they’re up in heaven watching him compile the box set and keeping their legacy alive. He proves listeners that they’re more than just the guys from Yes and Rush. Speaking of Yes, he gives his tip to Steve Howe from classical to pounding hard rocking unexpected momentum with horn section for ‘The Inner Battle’.

When I listened to his appearance on the two tracks he did with guitarist Kazumi Watanabe, I think of Michael Hedges and Bill Laswell collaborating together on a project that could have been a perfect combination. Here on ‘Andre’ and ‘Small Wonder’ Kazumi gives Bill the opportunity to come in and out when he has drums and percussions ready.

He’s almost like a conductor at times to return home and carrying Bill with him on his roots in the Land of the Rising Sun. There’s the Asian sound, jazz, and bluesy improvisations that is like a crying to the gods, knowing that the mission is accomplished.

As we get close to the end on the sixth and final disc, I would like to mention about one little antidote. And that is the collaboration with Ralph Towner and Eddie Gomez by taking a trip down Flamenco and Guaraldi Street on ‘Thistledown’.

You can hear both Ralph’s nod to Ottmar Liebert and Eddie’s wildly string bass going to town as Bruford follows the rhythm to the beat while Towner’s piano and guitar, dances to the midsection for the sun to come out after a long heavy 2-day rain that they went through. Now onto the improvising sixth CD. There are four tracks with Yes alumni Patrick Moraz which is covered.

Say what you want about Moraz, but man can he play the piano so damn well, you can almost hear Mike Garson’s arrangements in there from the insanities of ‘Galatea’ and ‘Symmetry’. I mean it’s crazy, but the way those two work on those compositions, it’s like watching a massive tidal wave hitting at the right moment.

But Moraz brings out his synths to add more lightning strikes by waving those ‘Flags’ momentarily before heading back into the ‘Rhapsody in Blue’ segment by bringing this massive painting of the Big Apple to life with ‘Split Seconds’. There are so many I wish I could go through, but it would take a huge amount to go through. This is a great introduction to discover the sound and career of Bill Bruford.

It’s like going through a massive scrapbook that you found the attic and reflecting the memories you had that were very good. And for Bill, this set is an excellent recommendation to see what you’re missing. Because if you think of his time with Yes and King Crimson, you’re in the ride of your life.