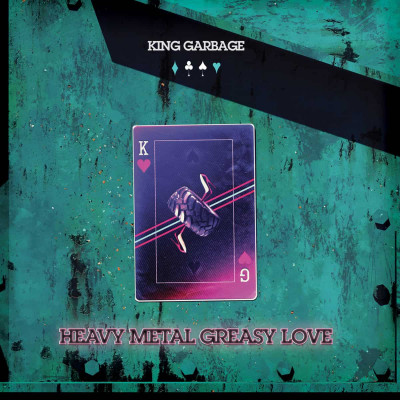 King Garbage have been combining classic sounding soul with contemporary elements for a number of years now and it is justified to say that they keep on getting better and better with each piece of new music they put out.

They return with their latest album, the spectacularly titled, Heavy Metal Greasy Love, their first album on Ipecac Recordings and it sees the duo of Zach Cooper and Vic Dimotsis mix soul, r&b, jazz, hip hop beats, blues and more to create a wondrous record that is full of nothing but positive vibes and feelings and even when the feeling of melancholia is there as well, it is done so in an uplifting manner.

From the opening salvo that is the truly soulful ‘Checkmate’ (complete with triumphant use of a brass section, something that is prevalent through the album) to the sublime cool of closing of ‘Peanut Butter Kisses’, this is an album that exudes not only soul and passion but variety and a true lust for life.

Different sounds such as those are fully explored but it has to be said that it is the soul that binds them together that makes Heavy Metal Greasy Love so enjoyable.

Songs like ‘Let Em Talk’, ‘Monster Truck’ and Never Die are fully formed anthems but delivered with an effortless cool and it sounds as though King Garbage are having as much fun playing these songs as they are to listen to.

There is a special kind of energy running through the songs on the album and all the different musical elements that come together are delivered stunningly and you won’t be able to get the smile off your face as you listen to this album and the vibes that the songs give out are perfect for late nights, hazy mornings and sunny afternoons.

Heavy Metal Greasy Love is a special record that sees King Garbage meld a lot of different musical elements into the nine songs that make up this album and each and every one is uniquely uplifting in its own way and makes for a joyous and timeless listening experience.