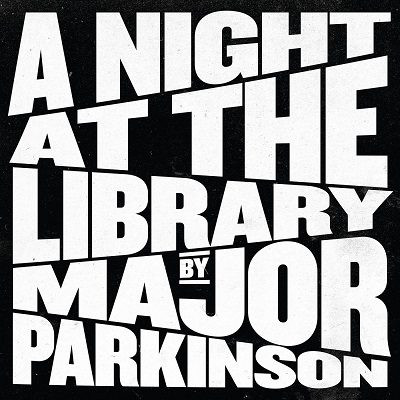 A Night at the Library by Major Parkinson

2020. The year when everything came to a screeching halt in March as COVID spread throughout the entire world. No premieres, no live concerts, no Comic-Con’s (except at home), nothing. But on May 15th that year, Major Parkinson decided to do a scaled down streamed performance at the Bergen Public Library.

The band’s performance is like no other. While they were stripped down to the core, the songs from Blackbox, Twilight Cinema, Songs from a Solitary Home, and their 2020 single ‘Jonah’, the Norwegian masters bring these parallel cinematic songs to life during these tricky times.

From the first two opening tracks ‘Lover, Lower Me Down’ and ‘Black River’, you get a sense of being lost at shore in the middle of the Pacific Ocean. Jon’s vocals has this heartfelt lost letter that has been buried at sea for many, many years.

Both Lars and Claudia’s arrangements bring to mind an intense waltz from David Lynch’s 1984 unsung but misunderstood sci-fi gem, Dune. It is like a glowing flower revealing its true glory and combinations between iamthemorning and MoonJune’s poet Copernicus that Jon’s vocals remind me of.

Now I can imagine he’s often compared to both Leonard Cohen and Tom Waits. If I had mentioned that in my review, I would get pigeon-holed, big time! But it has that strong resemblance to the New York philosopher and poet Copernicus himself.

He brings all of these intensive dances to the forefront with ‘The Wheelbarrow’ as the rhythm section brings all of the fire inside the library while he snarls like something straight out of The Threepenny Opera and Mahogany. As he lets out his screeches, Lars pounces his piano like a madman in a steampunk vibe in the ‘Beaks of Benevola’.

Not only he does that, Sondre does the same thing by hitting his drums like a motherfucker. As Lars and Claudia follow Sondre in hot pursuit, Jon transforms himself into a vicious werewolf, howling at the gods before he catches his breath before they go into the next set with ‘Strawberry Suicide’.

Claudia’s violin sets up this dooming aftermath of the tragedy that’s unfolded as she joins Jon on the vocal sections to life his spirit inside the Public library. You feel the acoustics growing stronger during the recording as Lars sets up the tragic scenario before she sings in this poetic echoing form of a nursery rhyme texture of ‘Isabel: A Report to an Academy’.

The pin dropping sound of Sondre typing on the typewriter like a madman, sets up the crime scene that’s happening this red hot minute. The lights go from one area to another as the camera focuses on Jon’s dancing to Claudia’s improvisational exercise so he relieve the stress inside his body.

Now this is where Major Parkinson dive into the waters channeling William D. Drake’s masterpieces; The Rising of the Lights and Revere Reach. With a gravity hook to climb across the city, they prepare themselves another attack with a cabaret vibe between the late ‘20s, early ‘30s in the heart of Paris preparing yourselves for a crazy game of ‘Baseball’ before heading back into the Congo as we wait for the arrival of the ‘Night Hitcher’.

‘Before the Helmets’ sounds like a song Mariana Semkina had written for the band at the time the duo were recording for the Lighthouse sessions. It has a mournful composition set in the middle of nowhere, knowing that it is going to be their last time here on Earth.

‘Jonah’ tips its hat to both David Lynch’s Eraserhead and Peter Gabriel’s Melt release. You can tell Jon and Claudia bring a lot of heart to this song as they come out of the dark passageways to finally see the light at the end of the tunnel to greet their friend who they haven’t seen for many, many years.

Then, they close out the library in the style of Klezmer music in the RIO (Rock In Opposition) format, that is so perfect to perform in Bar and Bat Mitzvahs to dance in the ‘Heart of Hickory.’ After it was over, I had a fantastic ride to be a part of Major Parkinson’s adventure that was waiting for me.

Their music may not be everyone’s cup of coffee per se, but the way they did their streaming performance two years ago inside the Library, it was to let everyone know to chill and relax from all of the crazy shit that’s happening in the outside world and have music be your guide.

So if you want to ask yourself, which Major Parkinson album should I begin with, it would be their performance at the Bergen Public Library to get you going. Believe me, once you join the crew, it is a ride you will never forget.