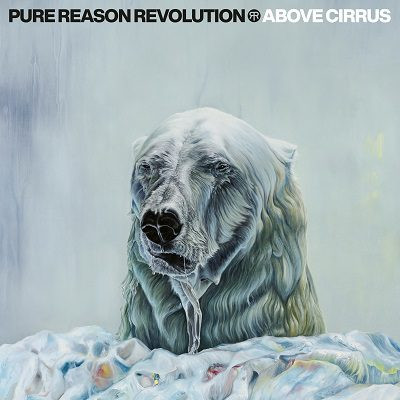 Above Cirrus by Pure Reason Revolution

“We were trapped in the prism / But it was our prism / No others/Our safe place / No water/No light / No one / Just us.” The opening tribal fortress of Pure Reason Revolution’s ‘Our Prism’ becomes a ticking time bomb waiting to explode from their latest release on the InsideOut label, Above Cirrus.

Their fifth studio album showcases attitude, late night drives, and an imaginative move that has been brought to life. I can remember vividly hearing their music the first time after reading about them in PROG Magazine for their third album, Hammer and Anvil when I was in College.

I bought the album straightaway from The Laser’s Edge website. I played it twice and had forgotten about them. Looking back on it, I wasn’t ready for them at the time. Since they reformed in 2019 after calling it a day in 2011, it’s time for a re-introduction to dive back into their pool once more.

Above Cirrus as I’ve mentioned earlier, is a late night drive filled with attitude, fear, and beauty. Chloe Alper, Jon Courtney, and Greg Jong have brought their Frankenstein to life for 2022. ‘New Kind of Evil’ has this dark, country ride in the middle of the Nevada desert filled with sliding arrangements, electronic chugging midsections, howling synths, garage-rock attitude, and evoking Astra’s 2009 debut, The Weirding.

‘Phantoms’ makes you want to hit the dance floor and go through this Mastodon-like electronic dance that is very challenging. You can tell the trio listened to Crack the Skye multiple times during the making of Above Cirrus whilst tipping their hat to the metal masters.

‘Cruel Deliverance’ is a mellotronic atmosphere detailing themes of being in the same prison for a long time until you want to break free from these chains. There’s the mournful vibes, wah-wah guitars, looking at the sun that shines a light in this Orwellian nightmare during the pandemic.

The first minute of ‘Scream Sideways’ starts out with a hymn-like arrangement for the first minute before it goes into this post-rock environment channeling Mogwai’s compositions that the band go for. Rumbling drum and guitar exercises, Pure Reason Revolution bring in the hay-wiring effects to make the composition go bat-shit crazy!

Then, they take their spaceship and fly towards the Meddle-era, mixed in with an ingredient from Motorpsycho’s spicy flavours. They go into some space maddening cosmo as ‘Dead Butterfly’ is an aftermath of sorts of this brutal war that’s happened. With some casualties.

The mood changes with an electronic attack on the senses featuring a pummelling guitar eruption that channels some of the vibes Steven Wilson had from the latter-part of Porcupine Tree. With its metallic-electro pop vibe, it can make you not back down without a fight.

‘Lucid’ closes the album with a cliffhanger. We may never know what PRR might have in store for us in the next chapter of the story, but the mournful pianos, walking into the distant, bruised and injured from our bodies, tribal drum work, and soothing vocal arrangements, they are cooking another experiment behind closed doors that we’re not allowed to enter because it is top secret.

Above Cirrus has made me appreciate Pure Reason Revolution’s music. While it was a challenge, it is a powerful structure detailing the cinematic trilogy that we badly needed and give the Marvel Cinematic Universe, the big, giant middle finger it deserves!