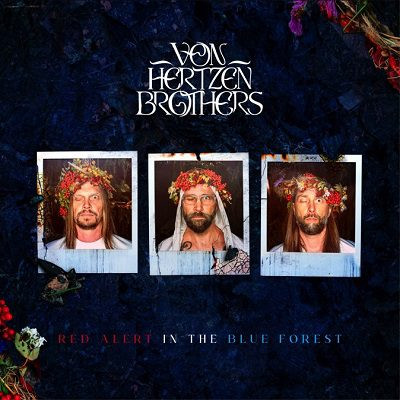 Red Alert in the Blue Forest by Von Hertzen Brothers

It’s been a long, long time since I listened to the Von Herzten Brothers music. The last time I reviewed them was on my blogsite, Music from the Other Side of the Room nearly 12 years ago when I reviewed their fourth studio release Stars Aligned after reading about them in PROG Magazine. Then after that, I moved on to greener pastures. Until heading back into their swimming pool with their eight studio release, Red Alert in the Blue Forest.

The maestros from Finland have brought something powerful inside their kitchen table as it shines brighter than ever. While I missed out on the previous releases, Red Alert is one of those albums that punches you in the gut with a massive hardcore punch.

Most of the songs that are on the album are like mini-operatic stories set in parallel universes that the brothers have brought to life. From being lost in the middle of the Atlantic with Celtic arrangements for ‘The Promise’ the CSN harmonising vocals over the loss of a loved one with tragic details on ‘All of a Sudden, You’re Gone’, to a space shuffling Moog rocker with the Captain on the helm as the brothers become the ‘Pirates of the Raseborgian’.

Kie, Jonne, and Mikko really are storytellers telling these adventures in the middle of a campfire with visionary images to life while going for an acid folk taste for ‘Anil’ combining Comus, Nick Drake, and Trees rolled into one with these sun rising techniques. But just as they get on their horses and ride off into the electro-sunset to see the ‘Northern Lights’, it becomes a trip beyond the Tangerine Dream express from the Cyclone period with tripped out phasing guitar structures.

Then they reach massive temperature levels going for the opening driven car ride for the ‘Day of Reckoning’. No matter what kind of turmoil’s that they went through during the course of the song, they got each other’s back by hurling towards heavier midsections with an intense roller-coaster ride that is out of this world. The 10-minute ‘60s spy chilling sound of the ‘Peace Patrol’ finally becomes an action-packed movie.

Believe me, this ain’t the Marvel Cinematic Universe, this is a real movie brought to life that the Von Hertzen Brothers have unleashed to the silver screen. There are aspects between Devo, Oingo Boingo, and the Black Holes and Revelations-era of Muse rolled into one. But it’s a thrill ride like no other.

Cake-pounding arrangements, crazy sax and guitar solos, and a perfect send-off that will keep you guessing until the end. Red Alert is the album that we need to lift out spirits up. And for the Von Hertzen Brothers, their mission is finally completed until the next one. So be prepared to embark on this roller-coaster ride that’s waiting for you.