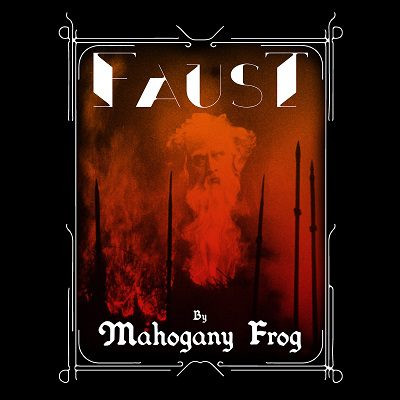 Mahogany Frog has been pretty busy this year. After their 2021 release In The Electric Universe, it’s quite a surprise to see what the band will do next. And this time, it’s their toes into the waters of alternate film scores. This time it’s their latest project Faust, based on the 1926 silent film by filmmaker, F.W. Murnau.

Alongside his horror masterpiece Nosferatu, Faust is one of Murnau’s crowning achievements. The story is based on the historical figure, Johann Georg Faust. He becomes dissatisfied with his life by making a deal with the devil by offering his soul for knowledge, pleasures, and paying the ultimate price at the end.

Like Toundra who had done their alternate score for The Cabinet of Dr. Caligari, Mahogany Frog takes it a step further. Their score for Faust combines intensity, experimentations, snarling fuzz-tones, and electronics. And the result, is a startling vision of what the band has brought to the screen.

From its chaotic hay-wiring effects that Epp and Warkentin create on ‘Faust I (Including: Alchemy)’, you could tell that the terror has only just begun. It becomes a scene of decay, terror, and the plague that will hit this little town with monstrous keyboards to create this massive tidal waving effect that unleashes hell like no other!

‘Plague I’ starts off innocently of its carousel organ lullaby effect before the dark clouds approach the festival channeling its krautrock effect by diving into the effects of Silver Apples, the Ummagumma-era of Pink Floyd, Cluster, and CAN. trip-hop, electro-loops, and crazy twists, the Frog’s bring the terror upon its viewers.

‘Crossroads’ is like going inside a dream. You feel the pin dropping thunderstorm sequences coming over the horizon. Ellenberger makes his bass sound like the bells tolling over the horizon, knowing that the disease has taken another life.

While we’re not alone, it’s the smoky atmosphere that startles you. The eerie farfisa organ-like sound the band creates, becomes like a clock-ticking scenario not knowing when the main character begins to make a decision; being young again, or die a miserable death as an old man.

And that’s when all hell breaks loose on ‘Stoned I’. That’s where the people turn against Faust by throwing stones at him after being scared by the holy cross. I felt the explosion hitting as it becomes a free-for-all attack as the guitars go in for this Sodom and Gomorrah approach to have the crowds go in for a full riot.

I always imagine the compositions that Mahogany Frog wrote for Faust, could have been written for John Schlesinger’s 1975 unsung masterpiece, The Day of the Locust. The compositions could have been used in the shocking climax at the end of the film as the band go for the jugular to take us on a crazy magic carpet ride channeling The Mars Volta’s Frances The Mute-era of ‘Flying Carpet I’ and ‘Faust II’.

‘Muhme Marthe’ becomes this Morse Code tapping arrangement as Gretchen meets her aunt and tells her about the precious jewels she’s found in her drawers. The sound of birds chirping, joyful synths, and children playing, gives the viewers a sense that something doesn’t add up.

‘We Encircle Within This Ring’ returns back to the Trip-Hop grooves from Rudolph’s drumming textures while ‘A Decision of the Flower’ brings to mind Fire! Orchestra’s Enter. You can imagine the band tipping their hats to the Scandinavian maestros; Mats Gustafsson, Johann Berthling, and Andreas Werliin.

There’s a sense of calm and beauty for a few minutes before the storm and sheet metal workers clanking from 8:00 in the morning until 2am, makes you go through another long day at work. ‘Dirge II’ is a tribute to both Goblin and Wendy Carlos. Now I can’t tell if it’s Epp or Warkentin doing the sliding guitar sounds, but it adds fuel to the fire for Faust knowing that the Devil’s deed has been done.

Between Clockwork Orange and Tenebre, the Frog’s know their musical chops by adding enough hot-blooded temperature levels to go up, not knowing it is going to be a hot day in hell.

Mahogany Frog does it again by proving listeners that there isn’t a single stop sign for them. While Faust was a big challenge for them by opening the door to alternate film scores, they proven themselves that they are stronger, dominant, intense, and tougher as the eye could see.

If you want to talk about film scores, then this mo-fo will knock yo’ big-ass out of your chair like there’s no tomorrow!