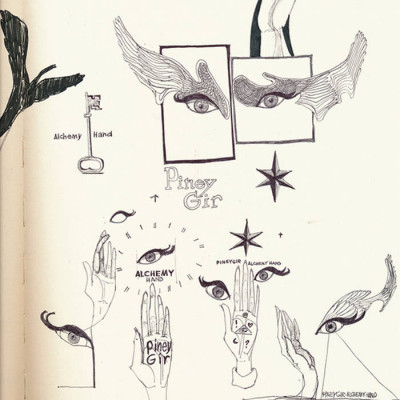 Ok, if it was folk or jazz, the audience for the occult/spiritual prefix would be quite defined, but put that one in front of pop/rock and you’d have quite a few listeners scratching their head who would qualify for such a (sub)genre.

Well, here is one such artist comes via Kansas City and Pentecostal upbringing – Piney Gir, who has Alchemy Hand, her new 4-song EP ready.

How she arrived to combining catchy (real catchy) pop/rock with occultist and/or spiritual themes doesn’t matter, but probably jumping from her religious background and following the Grateful Dead around on tour in the ‘90s and all that goes along with such experience might have something to do with that.

Yet, instead of going into long and winding jams or folkish struts, Piney Gir likes her music to be more in the vein of Supergrass or Oasis. No wonder, she has toured with Gaz Coombes and Noel Gallagher.

It also helps that Gir is a songwriter whose pop is of a more sophisticated brand, that she has a voice that really suits it and the musicians involved in recording these four tracks are perfectly able and suited to her music.

Essentially, Alchemy Hand is both thoroughly enjoyable pop/rock, no matter whether you are inclined or not so much towards Piney Gir’s spiritually-fuelled lyrics.