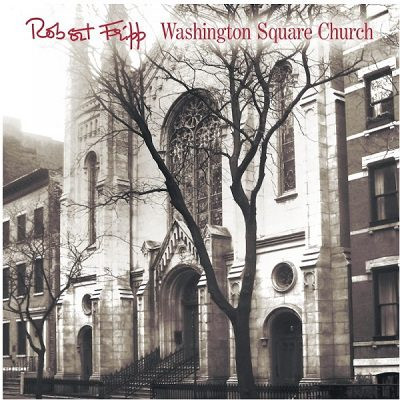 In the summer of 1981, Robert Fripp who had completed the first round of concerts of the revival King Crimson in May of that year, headed back to the States by doing a long week residence at the Washington Square United Methodist Church on 135 W Fourth Street in New York. The church was built in 1960 and had been home to many congregations. But it became a venue such as the Black Panthers, Gay Men’s Health Crisis, and various organisations.

Here in this CD/DVD set of the performances of the Frippertronic concerts, Robert goes as far as he can go by creating various textures beyond the horizonic landscapes inside the Church. It gives a sense of freedom, carte blanche, and taking ideas of building up the musical structures, one step at a time.

The 11 movements that clock in at 1 hour and 19 minutes, are like exploring various paintings at the Guggenheim museum or watching the mountains come to life on the IMAX screen. Fripp takes audiences with him on a journey that is beyond our wildest dreams.

You can look at portrayals of the Grand Canyon, the Northern Lights in Antarctica and Iceland, and the gentle rolling hills in Denmark, Fripp brings his machines to life and taking us on a tour of those locations that are stirringly beautiful. There are moments where he takes us into these cavernous caves that have a complete mystery inside those walls with sinister overtones.

At times he makes his guitar sound like a wolf howling at the full moon like crazy, knowing that there’s a killer on the loose by channeling his work with Brian Eno and David Bowie between Here Come the Warm Jets and the Berlin trilogy. Fripp lets the audiences and listeners know that he hasn’t forgotten his roots.

There are moments where his guitar suddenly transforms itself into a vicious snarling beast, eating a huge amount of human flesh like crazy by destroying the town with unbelievable results! There’s a Jekyll and Hyde texture he would create whilst Churchgoers would have shivers up their spine every Sunday Morning to preach the gospel, but knowing it’s a moment that they’ll never forget from the Frippertronic recordings.

Using wah-wah pedals and Riley-sque surroundings from A Rainbow in Curved Air, he returns back to the Crimson structures from the Lizard-era. Continuing where he left off in the final section of ‘The Battle of Glass Tears: Prince Rupert’s Lament’, the funeral march becomes even more deafening, dooming, and the big question that the churchgoers are asked, where do the soldiers go next after an exhausting bloody aftermath they’ve encountered?

Following my encounter with Music for Quiet Moments this year, the Washington Square Church recordings are quite an exploration to see what Fripp was doing during those time frames at the beginning of the ‘80s. While it may not be everyone’s cup of coffee per se, the movements that is on here, it’ll make you want to find your true inner self.