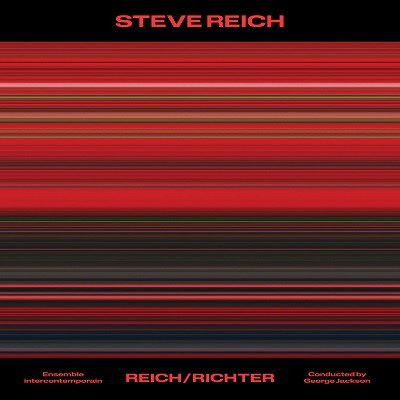 Creating music for a visualized film can be challenging, but also taking risks. For Steve Reich, he took a chance to write and compose music originally for Gerhard Richter and Corinna Belz’s film, Moving Picture (946-3). Now performed by the Ensemble Intercontemporian, led by George Jackson, the visuals for Reich / Richter are a gorgeous painting that has been brought to life.

The genesis behind the project came about when Reich read Richter’s 2014 book Patterns. The book has a total of 238 patterns that Gerhard selected by taking images of obstract paintings and dividing it in two. Gerhard is one of those artists that produces both abstract and photorealistic paintings.

What Richter would do is take a photo of the painting and put it on his computer and go from mirroring images into different striply, smaller images. The piece was performed at the Shed in New York three years ago, then at The Barbican in London by the Britten Sinfonia, and this recording you have in your hands by the Philharmonic in Paris released on the Nonesuch label.

Since 1985, Nonesuch and Reich have made an excellent team together starting off with The Desert Music to 2018’s Pulse Quarter. And a new collection of his complete works will be out next year, so get those Christmas wish list ready for that.

But let’s get into Reich / Richter. Listening to the Ensemble Intercontemporian’s vision of the four-part composition, it’s like walking through one of Richter’s film as you look at the pixels coming to life, or as Reich describes it with Boosey & Hawkes back in 2020, “a two note motive on steroids. And forte all the way to the end.”

So there is a power and dynamic structure that is on here by having your jaw dropped to the floor. Throughout various landscaping pianos, woodwind, strings, and xylophones coming together as one, the textures can be ominous, chilling, and revealing whilst Jackson takes them to the next stage. And the Ensemble takes it right there by bringing both Steve and Gerhard’s vision to life right in front of your every eyes.

Reich / Richter is quite an absorbing release for 2022. Whether you get it or you don’t, Reich’s music takes it up a notch by going for the jugular to bring the score to life on film. With bits of detail that’ll keep you hypnotise until the very end, Richter’s pixelating images to the composition is an exhibition you’ll never forget.