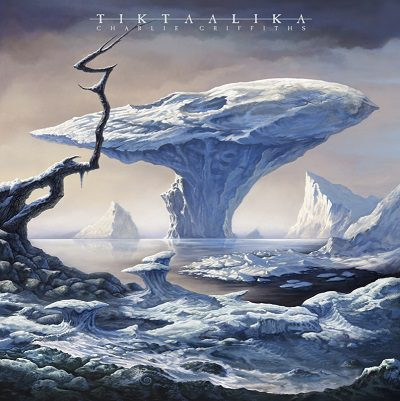 Charlie Griffiths has been the right-hand man of Haken for 18 years since he joined the band in 2008. With the band’s launch in 2004 and six studio albums, one EP, and a live album in the can, he keeps the machine going. That and his first solo release entitled Tiktaalika on the InsideOut label showcases Griffiths brainstorming momentum to go beyond the genre.

And for Charlie, Tiktaalika is like capturing lightning in a bottle. This isn’t just a prog metal smorgasbord, this is Charlie going for the jugular. Not only he’s one hell of a guitarist, but can play bass and keyboards which is evidential one of the tracks that is on the album, followed by singing on the other.

Tackling themes from fossilisation, geological time periods, and humanity’s connection with each other, Griffiths is a masterminding storyteller. And to be allowed to have vocalists from Tommy Rogers (Between the Buried & Me), Daniël de Jongh (Textures), Vladimir Lalić (Organized Chaos), and Neil Purdy (Luna’s Call), followed by guest musicians from Darby Todd, Jordan Rudess, and Rob Townsend, they lend Charlie a helping hand to bring Tiktaalika to life.

You can hear reprises of ‘Nocturnal Conspiracy’ from Haken’s second release Visions by carrying a semi-sequel of the 13-minute epic on ‘Luminous Beings’, ‘Dead in the Water’, and ‘Digging Deeper’. It gives Charlie more of a continuation of the story by bringing a fascination of the characterisation’s obsession with plotting and conspiracy theories.

There is a slight momentum that this person has suddenly gone off the rails and he’ll never return to being normal as he becomes a madman inside the cuckoo’s nest. Odd time changes, off the wall combinations between thrash, snarling bass lines, channeling Les Claypool, and cookie monster vocals that’ll shit your pants like crazy!

Opening ‘Prehistoric Prelude’ is almost like an overture-sque introduction that Charlie goes from classical epic textures and balls to the wall riffs channeling Kill ‘Em All-era from Metallica. ‘Arctic Cemetery’ gets the ball rolling as temperature levels go up and running to let everyone know that danger is over the horizon.

And Tommy hammers it down on his Jekyll & Hyde vocal lines. He knows that something bad is happening whilst the climatic sequence in the last minute gets even crazier. The title-track goes for the THRAK and Larks Tongues’-era that Charlie took inspirations from.

But adding a little spice of the Brian May textures by going for that rising sun momentum as he channels the Indian tribal dances from the ‘Rite of Spring’ suite by Stravinsky in toe. It isn’t a metallic crunch, but a classical boundary to have the volcano to erupt while the last three minutes become a militant march and mournful rain pour.

Charlie goes back and forth between acoustic and heavy wah-wah tones as he climbs to the mountain top while Todd goes for that pounding heartbeat to erupt even more with amazing results! Daniel leads the pack once more by reaching the finish line as the tidal wave starts to come and destroy the city with ‘Crawl Walk Run’.

There are elements to Mastodon’s ‘Oblivion’ mixed in with Voïvod’s time with Noise Records during the 1980s, Griffiths, de Jongh, and Todd began to shoot a lot of bullets like crazed psychopaths to go out in a blaze of glory with a sonata twist before giving metal heads one last farewell by going ‘Under Polaris’.

I’ve always wanted to hear a prog metal album done right. And for Charlie, he has delivered the goods on his solo debut. I hope to hear more from him in the years to come alongside his work with Haken. But with Tiktaalika, the game has just begun.