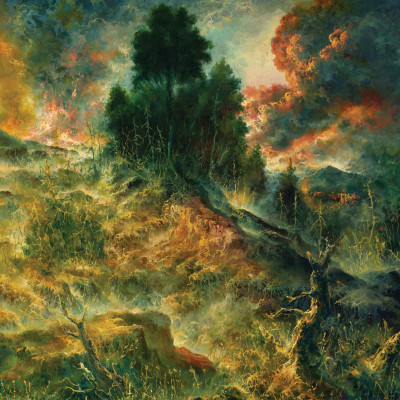 The debut release from Epitaphe back in 2019 was one of those “If you know, you know” moments in the fertile death-doom underworld. Expansive, ambitious and blessed with riffs that tossed and crashed like waves in the midst of a typhoon, it marked the French trio as a band who had something to say and their own, very specific, ideas on how to say it. II is predictable in that continues to further their ambition and scope in songwriting but rather than a gradual improvement, the past few years have allowed for an exponential growth that already puts them as one of the most impressive entities in Europe right now.

Bookended by two brief-ish instrumental offerings, namely the beautiful pastoral introduction ‘Sycomore’, a largely acoustic composition that nonetheless allows for moments of technical brilliance, and the formless ambiance of closer ‘Merging Within Nothingness’, II can be thought of as a musical triptych. Its three 19-minute-long pieces are each a distinct artistic work in their own right, filled with a degree of musical and tonal complexity that could easily be stretched out to fill an album, but when viewed together paint a larger picture, an epic journey through Elysian fields and Stygian underworlds that can be difficult to fully comprehend on first listen. It’s only with patience, an open ear and an open mind that the full scale of what Epitaphe achieve can be appreciated.

The key to Epitaphe’s approach is not that they are willing to go to extremes but more that they don’t even see these extremes as being separate. Sometimes they flip between delicate acoustic passages and frantic bursts of death metal cacophony, the transitions as jagged and disconcerting as the riffs themselves, but just as often the light and shade flow into each other, making for a curious interplay of textures and moods. The musicianship on display does make this easier, with the frankly astounding range of guitarist/bassist/ambiance maestro LB taking the crown for most work done by one person in an album this year. On bass, he hits the heavier moments with a raw, ugly edge that feels just the right level of murky, but the rest has a warn, jazzy flow that immediately sets the listener at ease. Likewise, the guitar work is unquestionable when it comes to both the straightforward brutality and the tangled, twisting flurries that punctuate ‘Celestial’ yet when he stresses melody, the results are simply gorgeous. There are parts of this album that are just a joy to get lost in, moments of calm and bliss where there is nothing but dappled sunlight, breezy meadows and an awesome guitar solo.

As LB takes the listener down ever more wondrous routes, AG’s drumming provides its own counterpoint. Never content to simply keep pace, he adopts an approach that owes as much to jazz and free percussion as to anything traditionally metal. While this fluidity does help when it comes to nailing the precision of II’s death-influenced runs and for when they dare to let the pace slow down while keeping volume and aggression high, he’s at his most interesting when his fills come crashing down with the unpredictable violence of an avalanche. Similarly, vocalist PB ventures far out of the relatively comfortable territory that he explored on I. His singing voice has a rich, confident tenor that’s ideally suited to the broad scale of the music on offer and though he often growls and rasps with the best of ‘em, he feels thankfully free of cliché.

While part of that is down to the impressive control he harnesses over his voice, as much praise can go to the canniness of the songwriting. These three works tell stories of pain and loss, of hope and redemption, and they do so while demonstrating the strengths of their players to the utmost. Even patches of ambience and a brief, isolated saxophone inclusion feed into this sensation of including everything that needs to be there, and everything that is there being necessary. By factoring in the beautiful cover by Petri Ala-Manaus, an oil-painted landscape that is simultaneously placid and loaded with the chaos of nature, II transcends into the realms of the truly great metal albums. Brutal, beautiful and with every minute of its considerable runtime carefully considered and orchestrated, this is a stunning accomplishment from all involved.