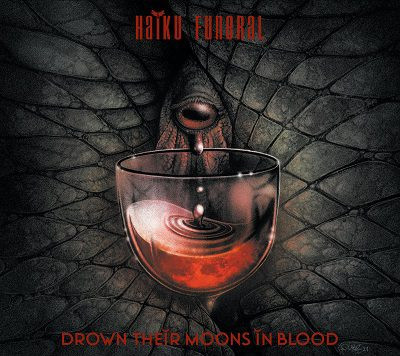 Drown Their Moons In Blood by Haiku Funeral

How long it’s been? 10 years maybe? Yes, that’s right. Ten years ago. I remember it very correctly. It has been ten years since I listened to Haiku Funeral’s third release Nightmare Painting and reviewed it on my blog site, Music from the Other Side of the Room in December of 2012.

And then I completely forgotten about them. Until their latest release Drown Their Moons In Blood which came out on Halloween last year. Which seemed like the perfect time to release an album in the Fall of 2021. When I heard about that Haiku Funeral had released a new album, I decided to jump back in their pool once more to see what I was missing.

When you listen to Drown Their Moons In Blood, it’s almost as if you’re putting on some old shoes you haven’t wore for a long, long time. The themes on Haiku’s latest release is set in a parallel universe where Shiva, The Destroyer and God of Destruction has controlled Earth with an iron fist. He brings fire, a post-apocalyptic vision of the planet, and a journey through a hellish world with no chance of escape.

The music itself has this sense of ominous terror coming at you as if something terrible had happened with the city torn apart. Decayed and filled with an industrial vibe set in a steampunk universe, the sounds from Kopecky and Dimitrov have created, have set up this snarling attitude to let survivors know that the nightmare has only just begun.

You get a sense of not just the black metal term, but an eerie approach of sitars playing that gives listeners some approaching levels of being hypnotic to the Sitar. Kopecky plays brilliantly on the instrument as he gives Walkner some ideas by using brushes on the drum kit.

But there are moments where Haiku Funeral channel some of the aspects of Aphrodite’s Child’s 666 and mixing in not only Nine Inch Nails, but Copernicus, Massive Attack, and the Zeit-era of Tangerine Dream. Haiku are more than just drone and metal, but taking some of the experimental touches to a whole other level.

Most of the time they channel the late, great Klaus Schulze during the Irrlicht-era as they kicked the door down by finishing some of the touches of ‘Satz: Ebene’ and giving it the right amount of all-spark it needed. Haiku Funeral’s music may not be everyone’s cup of tea per se, but what they’ve done is to bring the themes about the end of the world in front of our eyes.

Not only is it terrifying, but the envelope they pushed, is like an enormous giant battering ram, waiting to burst the door down with a hardcore explosion.