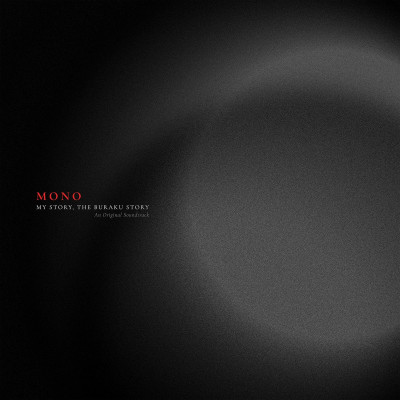 My Story, The Buraku Story (An Original Soundtrack) by MONO

The term ‘cinematic’ has long been associated with post-rock as a genre, and for good reason. It’s a musical style that thrives on drama, on emotional build-up and release, and on the beauty of simplicity, so it’s unsurprising that many of the big players have themselves tried their hand at scoring cinema and television from scratch. One of the rare exceptions has been Tokyo’s MONO who have scripted narratives to accompany their work but, apart from a few song inclusions here and there, generally strayed away from associating themselves with the visual medium.

Their score for My Story, The Buraku Story therefore marks a first for them. A documentary focused on the phenomenon of burakumin, a lower caste of Japanese society segregated due to having what were deemed to be ‘unclean’ occupations (executioners, butchers, etc.) and their families and on how their descendants continue to face prejudice despite discrimination against them having been outlawed decades ago, it’s an idiosyncratic topic that feels well suited to MONO’s pervading themes of loneliness, isolation and injustice. What is surprising is that rather than rely on their established techniques for creating tension and pulling at the heartstrings, their score is a muted affair that instead opts entirely for quiet melancholy and abstract gusts of sound.

With its distorted, modulated choirs and steady, synthesised pulsations ‘Doumyaku’ already sets a tone that seems both at odds and firmly in line with MONO’s emotional aesthetic. The subtle melody and furious bluster of Taka and Yoda is nowhere to be found but instead it’s Kunishi Tamaki whose influence is most strongly felt. Her delicate piano accompaniment has guided many a heartfelt passage over the years and it’s expertly wielded throughout these minimalist compositions. On ‘Kokyo’ it’s at its most effective, piercingly bright against swells of strings, its softness shining like a beacon on a moonless night while ‘Yurameki’ has an almost jazzy air to it. The latter is a striking use of space and resonance, an almost complete absence of accompaniment giving the melody adequate room to expand and inject its scant 3 three-minute runtime with enough pathos to fill an album.

In a way, what this album does is that encapsulates what have long been MONO’s strengths and weaknesses. When they focus on poignant, timeless sounds and keep that firmly in focus, they’re capable of moving the listener in ways that few others can. ‘Kioku’ demonstrates this admirably, strings gliding smoothly across a metronomic refrain, but in this more condensed form, they never really give themselves the chance to build on that atmosphere. Rather than crafting a tableau, a sprawling and fully-realised world that can be immersed in, what is delivered is a vignette where you can catch the gist and then it’s on to the next scene.

Much more interesting are cuts like ‘Chinmoku’ and ‘Himitsu’, drone-focused compositions that stress formlessness and abstract tranquillity. These crackle with life and though they have dabbled with these sort of structures in the past, it seems like this venture has given them the opportunity and the ideal format to truly experiment with them. They’re odd, haunting and send a chill through the bones that makes this entire record worth taking some time out of your evening and exploring.

‘The Place’, the most traditional guitar-oriented and traditional piece to make it through, closes out the album on the kind of dramatic and earth-shaking scale that just begs for a final credit roll but its inclusion feels tokenistic after what has preceded it. MONO have shown over the years that they can pull off surprising stylistic shifts and this is one of their most thought-provoking curveballs to date. It avoids the tropes of both post-rock and of cinematic scoring as a whole and instead delivers a quietly beautiful listening experience that hopefully paves the way for future endeavours.