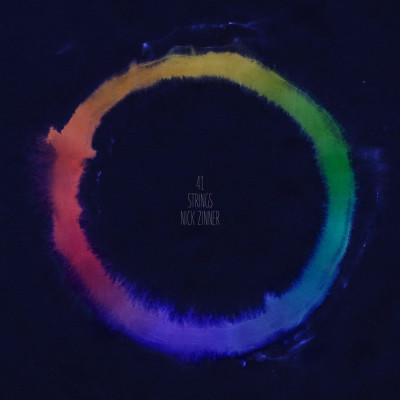 Yet, based on 41 Strings, Zinner’s latest solo release, both camps should definitely pay a more close listen, as Zinner, effectively combines both musical worlds here. Zinner has created ‘ a song cycle for string orchestra, electric guitars and expanded rhythm section in an attempt to cover the two musical worlds. The cycle was originally commissioned for a large-scale Earth Day event, 41 Strings draws inspiration from and pays tribute to the four seasons, each movement corresponding to a respective season. The world-premier concert was held on the 41st anniversary of Earth Day which encouraged the idea for an ensemble consisting of 41 string instruments.

For the more rock inclined, this might sound a bit ‘too classical,’ but they might change their mind when they find out some of the names included in the guitar and rhythm section –  Lenny Kaye (Patti Smith), Sarah Lipstate (Noveller, Iggy Pop), Paul Banks (Interpol), Gemma Thompson (Savages), Aku Orraca-Tetteh (Florence & the Machine), David Pajo (Slint, Gang of Four), Andrew Wyatt (Miike Snow), among many more; the rhythm section has maintained a consistent line-up with such accomplished players as Jaleel Bunton (TV on the Radio), Andy Macleod (Royal Trux), Hisham Bharoocha (Boredoms), Brian Chase (Yeah Yeah Yeahs), Ryan Sawyer (Gang Gang Dance) and Ben Vida.

On the other hand, Zinner’s music and the performance of the artists involved retains the core characteristics of modern (minimal) classical music, utilising the approach from both sides of the musical spectrum for a very effective and inventive results that have a much wider appeal than might initially seem.