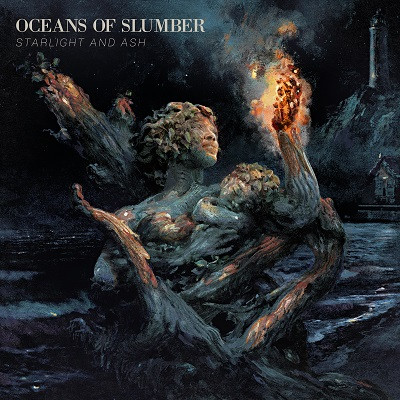 Starlight and Ash by Oceans of Slumber

“I’m drowning in your sorrow / In the belly of your cravings / In the darkness of your despair / I float face down.” The opening lines from ‘The Waters Rising’ gives listeners a sense of survival, loss, innocence, and calling for help. For Cammie Gilbert, she brings it all out there and pours her heart and soul into the first track. But for Houston’s own Oceans of Slumber, they’ve brought the circle in full on their fifth-studio release, Starlight and Ash.

This is where the band have brought enough energon cubes to get the ball up-and-running with a mixture of Metal, Art, Electronic, Soul, and real-good pop. Oceans of Slumber have brought in all of the ingredients to the kitchen table with strong sense of flavours that are impossible to ignore.

‘Hearts of Stone’ has a dramatic minor texture on the views of domestic abuse that Gilbert tackles. You can feel the presence of the Kscope label coming across the pond with this combination between Gazpacho and The Anchoress collaborating together.

‘The Lighthouse’ and the traditional folk song ‘House of the Rising Sun’ featuring Sleepytime Gorilla Museum violinist Carla Kihlstedt have a gospel-folk arrangement of a person’s demise in the heart of New Orleans.

While the third track has that country-gospel vibe with Gilmour-sque textures from A Momentary Lapse of Reason with thunderstorms approaching to clean away all of the hated and discrimination that’s been going on, the tenth sees Cammie, Mat, and Carla bring in the aftermath on the incident that’s occurred.

Carla’s sonata like string arrangements of the song bring forth the loss of innocence by being at the wrong place at the wrong time of luring themselves in to be murdered. And there’s also a lesson on how we can prevent to get away from the dangerous locations that’s happened, because a situation like this has happened many, many times.

‘The Hanging Tree’ goes into a destructive yet ascending rise to being free from all of the chaos while ‘Salvation’ channels Norway’s own Oak in the styles of their opening song ‘We, The Drowned’ from their 2018 debut, False Memory Archive. The mournful waltz of ‘Red Forest Roads’ gives guitarists Xan and Jessie a huge amount of ammunition to raise in the final section of the song.

And once that final section hits, Dobber gives them a chance to raise hell like no other. Then, he moves away from the drum kit to the piano to give the band members a chance to relax and have the sun come out for a bit during ‘The Spring of 21.’ Beverly plays with classical motifs with tapping effects that nearly sounds like raindrops falling from the sky.

But there is a chance for a new day tomorrow near the last couple of seconds in the instrumental piece to let listeners know, everything will be okay and the next chapter in the book will be different. Starlight and Ash gives Oceans of Slumber a lot of cinematic ideas and plot lines that are spot on.

It proves that the band have finally given the Marvel Cinematic Universe the giant middle finger that it badly needed. Not only that, but they proved themselves that they’re more than just a prog-metal band. And being able to branch out to see what new ideas they’ve finally unleashed for 2022.