(((O))) Review: The Tangent – Songs from the Hard Shoulder 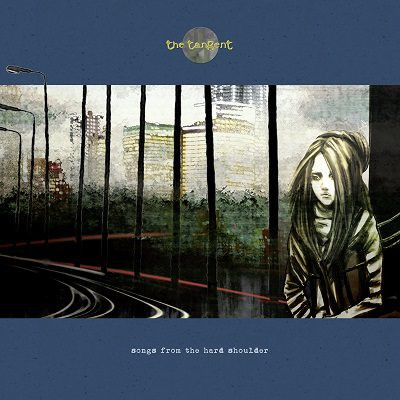 Songs from the Hard Shoulder by The Tangent

It’s been 20 years since The Tangent launched. Despite line-up changes, the band have released 11 studio albums from their 2003 debut The Music That Died Alone to 2020’s Auto Reconnaissance. Whether you get it or you don’t, The Tangent’s music can be as challenging as far as the eye can see.

Andy has been steering The Tangent’s ship nonstop. And it is stronger than ever before. That and their 12th studio release Songs from the Hard Shoulder is a return to the long song format. Three of them clock in at 17 minutes and 20. Except one at four minutes. And this is where the going gets good.

Now while I’m not a massive fan of The Tangent’s music, it’s always good to see what Andy, Theo, Jonas, Steve, and Luke have brought to the forefront in these story structure-like compositions that can transform itself into these imaginative movies brought to life.

Listening to the new album, is like a structure going through the pandemic, a story about a homeless woman surviving the 30th century, and full scale improvisations of various genres. Not to mention their love of the Motown sound. But The Tangent are no fools by revealing the hard work they’ve brought to the kitchen table.

‘The GPS Vultures’ begins with a bossa-nova groove by dancing into this odd time signature of the samba with militant fanfares. There is the Bo Hansson vibes that Tillson goes for, but going beyond the Attic Thoughts-era with some Canterbury twists.

Not only Luke handles that heavy electric powder-keg that is about to erupt, but he’s also showing his flamenco touches on his acoustic guitar, channeling Ottmar Liebert and Michael Hedges. There is a strong Greenslade vibe as Andy goes into Mellotron city with Roberts’ mid-fast drum work exercise before going into these Zappa-like climaxes with hay-wiring effects!

You can tell that The Tangent are having a ball giving cues to one another, knowing that this is an adventure worth exploring. Opening track ‘The Changes’ deals not only being cooped up inside your house during lockdown, but going this mass madness of cabin fever.

Andy finally goes inside his head on how much he can take this crisis with an autobiographical twist of a mellowing atmosphere on how much fun they have (Pre-COVID) performing gigs, searching for the next hotel, and honouring Egg’s ‘A Visit to Newport Hospital’ Andy plays with some incredible keyboard work, but talking in the beat poet styles of Allen Ginsberg.

Not to mention a little nod to The Beatles ‘Eleanor Rigby’ for a brief moment. The 20-minute story ‘The Lady Tied to the Lamp Post’ has a tragic theme detailing on a homeless woman survival on living in the streets at the peak of the 30th century during these tricky times she’s living in.

You can feel the loneliness, finding shelter in the coldest part of the weather with a huge amount of heavy rain pouring down like crazy, and shining bright in the midsection as Reingold channels Herbie Flowers’ arrangements before the band go into this crossover between Earth, Wind, & Fire’s lyrical structures from Maurice White, and the combination of Traffic’s ‘The Low Spark of High-Heeled Boys’ and P.F.M’s ‘Impressioni di Settembre’.

Then the movement changes as the composition goes on a roller-coaster ride that goes 400 mph with a lot of electrical energy. The last eight minutes goes into a massive tornado front as it starts to go on this dance of death routine that the band follow. ‘Wasted Soul’ sees The Tangent diving into the swimming pool of the Tamla / Motown sound.

From The Temptations and Marvin Gaye with sun rising quality, they raise the church building floating higher than ever before. The closing bonus track sees the band tackling UK’s ‘In The Dead of the Night’. You can feel the spirits of both Allan Holdsworth and John Wetton floating through The Tangent’s hat tipping momentum with light-speed exhilaration.

There is a strong crazy synthesised work that Andy does as he makes his keyboard go haywire once more before diving into the deep, dark forests of Tangerine Dream, Weather Report, trip-hop grooves, and meditated vibes between him and Roberts. They give listeners a chance to go through this trance with healing vibes during the pandemic.

It isn’t unexpected, but giving a chance to clear your mind and relieve all of the stress that’s making it hard on yourself, but at the last three minutes, there is hope and light at the end of the tunnel. The Tangent make the journey home back to Earth knowing that this trip was worth the ride on their latest studio album.

Songs from the Hard Shoulder is the big-dipper that they unveiled this summer. And it is a roller-coaster ride that’ll have your adrenaline pumped up and ready to go.