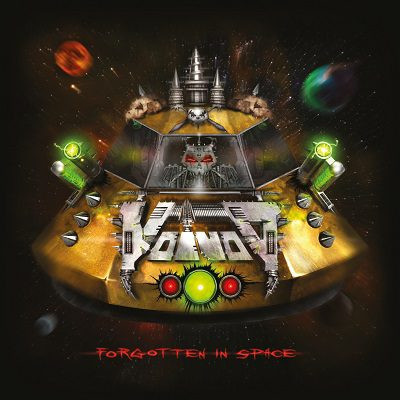 Forgotten In Space: The Noise Records Years by Voïvod

Back when I was a student in College, I remember my Mom taking me to Borders in the fall of 2006 when I bought issue 97 from Classic Rock Magazine when it covered the secret history of prog. Interviews with Iron Maiden at the time they were promoting their fourteenth studio album, A Matter of Life and Death; conversations about the state of prog with Cedric Bixler-Zavala (The Mars Volta), Steven Wilson, Captain Sensible (The Damned), Fish (Marillion), and Thijs Van Leer (Focus); and the top 5 prog metal albums you must own from bands such as; Queensryche, Iron Maiden, Dream Theater, and Opeth.

But there was one that caught my attention. And that was Voïvod. At the time, I didn’t know who they were. But I went ahead and bought Nothingface on iTunes and it was like nothing I ever heard. It had attitude, speed, and their best. Not to mention their take of Pink Floyd’s ‘Astronomy Domine’ was so damn good. And then, I forgotten about them.

Until 2017 when I bought the expanded edition reissues of their time with Noise Records from The Laser’s Edge (Rrrröööaaarrr, Killing Technology, and Dimension Hatröss). And that was when I knew I had to re-open Voïvod’s door once more to see what I was missing from the fellow Quebec maestros who gave the prog genre a real massive jolt of electricity that send shockwaves to the core.

Now in honour of the band’s 40th anniversary, the box set entitled Forgotten In Space is a return back to the label from the three albums they released from 1986 to 1988. It includes a 20-page booklet with interviews of drummer Michel ‘Away’ Langevin about the genesis of the band’s history, USB of the band’s Noise albums, mini-documentary DVD of live performances, interviews, promo videos, and demos of the band’s fourth studio album.

Like the box set that covered Van der Graaf Generator’s time with Charisma Records, Forgotten in Space will take you on a trip to where the underground thrash scene was more than just the big names from Slayer, Metallica, Megadeth, and Anthrax. Denis ‘Snake’ Belanger, Denis ‘Piggy’ D’Amour, Jean-Yves ‘Blacky’ Theriault, and Michel ‘Away’ Langevin, brought more ammunition to bring out the big guns by giving the glam metal scene a big surprise that was waiting for them.

Voïvod lets the metal community know that the four letter “P” word is longer a dirty word. Because Voïvod know their elements between speed, punk, and prog-rock like no other! Once I started to go inside the box set, I went straight for the rare demos of Dimension Hatröss. You could hear the raw energy of the band’s work-in-progress of what Voïvod were doing.

There’s a lot of power in Michel’s drumming between the opening ‘Experiment’ while Blacky gives Piggy enough bullets to launch a full-scale assault with Snake’s echoing vocals for ‘Macrosolutions to Megaproblems’ with unexpected changes that carries the Crimson torch like no other! Like the studio versions of ‘Psychic Vacuum’ and ‘Chaosmongers’, the demo version knocks it out of the ball park.

You can hear this punky attitude with bloody energetic power riffs that Piggy would create with more strange experiments inside the band’s laboratory. Now on the seventh track, I noticed that they started a little too early, but it doesn’t stop them to get back on the railroads by going 500 mph while delving into the deep, dark tunnels of a pre-Mogwai post-rock intro on the closing ‘Cosmic Drama’ that resembles ‘Glasgow Megasnake’.

But once they go into this gothic thunderstorm, they cooking with flames once more to bring the sounds of thunder and space maddening adventures that awaits them. Once you get into ‘Korgull The Exterminator’ and ‘Fuck Off and Die’, we ain’t talkin’ about Metallica boys and girls, we’re talking about pure hat-tipping momentum to the black metal scene with a massive ramming speed that’ll shit your pants like there’s no tomorrow!

‘Slaughter In a Grave’, ‘Trashing Rage’, and ‘Ravenous Medicine’ sees Voïvod honouring not just the new wave of British heavy metal scene, but a nod to doom metal gods, Candlemass and the Paranoid, Sabotage-era of Sabbath by continuing where ‘Symptom of the Universe’ and the midsection of ‘Electric Funeral’ had left off. The Spectrum performance which was recorded on October 12, 1986 which originally appeared on the Rrrröööaaarrr expanded edition five years ago, gets its own release both on vinyl and CD.

It still sounds like a volcanic eruption as the crowd cheers them on from the moment ‘Korgull’ gets everything running with a loud explosion. You feel the motivated forces that the band gives inside the club by going through ‘War and Pain’, ‘Tornado’, ‘Warriors of Ice’, and ‘The Helldriver’. I can imagine they gave the metal heads a real surprise with a massive shitload of fast-paced attitude that’ll punch you in the stomach so hardcore, you wouldn’t go to sleep for the next 24 hours.

It’s so great to hear these albums again once more that made me reintroduce myself to discover Voïvod five years ago. And the set here will be a trip down memory lane or up-and-comers who are discovering the band for the first time. Yes they were outsiders when they first started, yes they were overlooked in the speed and thrash metal genre, but after 40 years, Voïvod are still going stronger than ever before!

So to paraphrase David Bowie’s disclaimer on the back side on The Rise and Fall of Ziggy Stardust and the Spiders from Mars, Forgotten in Space is to be played at maximum volume.