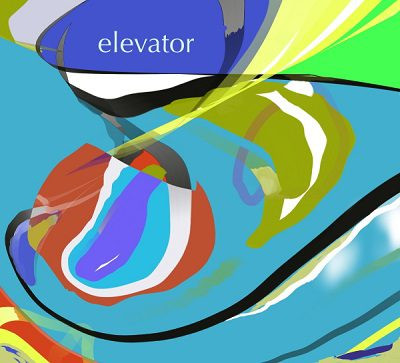 Since 1977, Adrian Belew is more powerful than a locomotive with no sign of stopping. From Talking Heads, Frank Zappa, David Bowie, Gizmodrome, to the success of Disney’s animated short from Pixar called Piper, which took home best animated short at the 89th Academy Awards. He has come a long away by keeping that ball rolling.

His textures on his guitar playing, it combines complicated measures, various insane textures, monstrous attitudes, and flying into the skies of post-rock, prog, alternative, and the avant-garde scene that adds a massive jolt of electricity. His 25th solo album release Elevator is where he has finally found his niche during the COVID-19 pandemic two years ago.

The themes on Elevator not only tackles the pandemic, but a dystopian universe of full-scale attacks, political figures from the left and right arguing like madmen, and the hope of finding a peaceful message to get out of their cabin fever houses to find a chance for conservatives and democrats to ceasefire with one another and figure out a way of truce with one another.

In an interview with Anil Prasad on Innerviews: Music Without Borders at the time Belew was promoting Elevator, Belew was asked about the achievements on what he wanted to do with the new album. “I was thinking about how music elevates people. So I set about trying to make a record that would do that.”

And with some of the enduring centerpieces on Elevator, Belew brings the crystal ball in its true form to show what the hell we’ve been through during these tricky times from 2020 to 2022. You have the surf’s up attitude with train-speed vibrations coming at you at 600 mph with a swirling calming motif at the opening of the ‘a13’ and a trip to the mid-1930s in a futuristic swing vibe with Rimsky-Korsakov of Adrian’s 12-bar blues on ‘A Car I Can Talk To’.

The mournful calming acoustic symphonic arrangements on the person’s spiral downfall on the damage he’s done by looking at himself in the mirror as Adrian gives him a massive reality check with ‘You Can’t Lie To Yourself’ before going into a beat poet dialog in the style of Supersister’s ‘Spiral Staircase’ with a return to the THRAK-era from ‘Taking My Shoes Out For a Walk’ and a conclusion to the song ‘Dinosaur’ had left off on ‘Attitude’.

But it’s the sun-rising Brazilian arrangements of an acoustic samba from the bays of Bahia as Adrian not only plays his guitar, but dances to the romantic groove of ‘Beauty’ by witnessing the Northeast region of the country before bringing everything to an end with Belew’s hat tipping momentum to blues legend John Brim on ‘Seventy Going on Seventeen’.

Elevator is Belew’s message to let everyone come outside and not be cooped up in their house or apartment with cabin fever panic attacks and finally redeem themselves from all of the crazy shit they had to endure during those two years. And for Adrian, he’s still keeping that electric spark glowing.