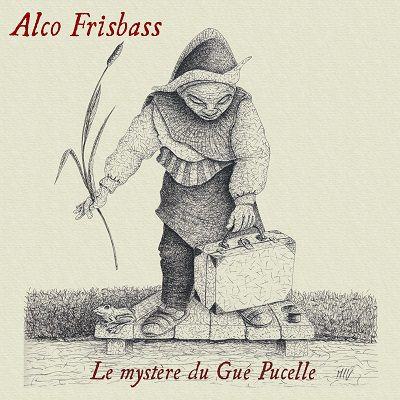 France has been quite the attraction of finding real good bands. Raging from; Ange, Atoll, Pulsar, Mona Lisa, and of course the dark lords themselves, Magma. They know their music very well when it comes down to the progressive rock genre. But when a band like Alco Frisbass, who have been around for nearly ten years, they turn water into a delicious drink of fine red wine, it is ready to be served at any second.

Their latest release Le Mystère du Gué Pucelle, goes through various time travels. From the Canterbury scene with fuzztone keyboards, synths, giallo-like scores from the late ‘60s, and Mellotrons galore! Five tracks into this bad boy, the strength and wisdom brings forth the early Caravan albums, and aspects between Darryl Way’s Wolf and the first four Camel releases.

Everything in what Frisbass are doing is to take you by the palm of their hands with some time changing molecule, waiting for their doors to be finally opened and reveal its true power. Take for example, ‘Sélénite’. It goes through some of the Italian Prog keyboard sections that becomes an ascending spiral staircase of swing to Monk-sque piano arrangements, mixed in with an exercise organ routine done by Mike Ratledge and Dave Sinclair to get you up-and-running for a hefty duty morning workout.

The opening title-track has a surreal horror film score to get the credits up-and-running to have moviegoers, jaw dropped. You have this crossover effect between bass, organ, and a drum section having a duel with each other as wah-wah pedals rise from their grave! But there are the Zappa vibes that is pulling through the Grand Wazoo sessions, followed by some preachy gospel organ textures inside Frisbass’ psychedelic church.

Once we enter inside their church, it’ll be a mind-blowing Sunday morning churchgoers will never forget. Then we enter into a dark passageways for ‘Histoire Diffuse’. It becomes a crime scene with some watery mellotron beauty. Mind you, it is a crazy twist, but it works very well!

Listening to this track, I can trace the bands and artists from Leonardo Pavkovic’s MoonJune label from D.F.A., Finisterre, and Tohpati. All three of them in a parallel universe handling the production levels for the recording sessions of The Mars Volta’s rehearsals. Not to mention an extended midsection paying homage to the Land of Grey and Pink.

Crazy funk-jazz, spiralling guitar lines, and flamenco heat, Alco Frisbass does it again. They’ve got everything down to a “T” by being a part of this train ride that becomes an adventure that’ll never go away.