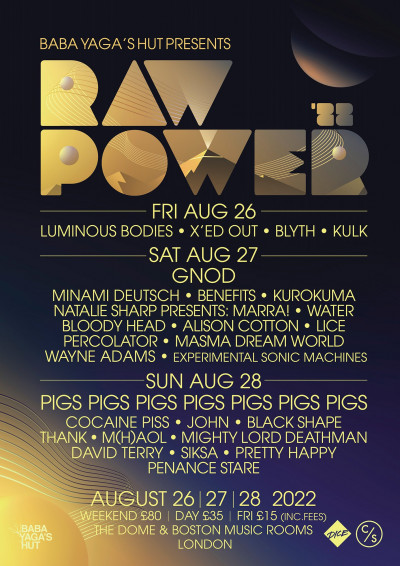 It was always an idea of having a heavy, left-field festival that brought together the various Baba Yaga's bands.

This years Raw Power Festival will sadly be the last edition of the event but they will definitely be going out with a bang! With headline performances by a Luminous Bodies, Pigs Pigs Pigs Pigs Pigs Pigs Pigs and Gnod and also featuring everyone from Kurokuma, Cocaine Piss and Benefits to Natalie’s Sharp, Bloody Head and John, this years event will sure to be one to remember. Gavin Brown caught up with Raw Power organiser Anthony Chalmers to talk about this year’s festival and memorable moments from the festivals past.

E&D: This year’s Raw Power festival is rapidly approaching. How much are you looking forward to this years event?

Anthony: Very much so! Still got some production bits to iron out (what the fuck is happening with the food!!) and gotta sell a bunch more tickets but always excited to see all the acts.

E&D: Who are you looking forward to checking out at this years festival?

Anthony: Personally I often look forward to seeing the bands the most that I have never seen before so Siksa, Kurokuma, Penance Stare, Percolator, Benefits and Mhaol off the top of my head. Pigs and Gnod two absolute classic Raw Power bands and hopefully every set should be killer.

E&D: How big a challenge is it choosing the bands to play at the festival?

Anthony: Overall it’s pretty straightforward as is so many bands that can play. Hardest bit is trying to secure the headliners and bigger bands.

E&D: Who have you been proudest of booking for the festival so far?

Anthony: Richard Pinhas did his first London show in many, many years at Raw Power that was a nice one. Same for Mainliner. Melt-Banana 2016 was a dream headliner, flew them over for it.

E&D: How much of a relief was it to have the festival go ahead last year after all that has gone on over the past couple of years?

Anthony: Was really really happy for sure. Stars aligned for it.

E&D: What have been some of the most memorable performances for you at Raw Power over the years?

Anthony: Part Chimp and Melt-Banana 2016, Selvhenter think the same year. Both of Circles headline sets, My Disco and Big Brave in 2018, Plenty of Luminous Bodies, Pigs and Godflesh one after another 2018…. Off the top of my head. So many more especially downstairs I haven’t mentioned.

E&D: How did the idea for the festival come about in the first place?

Anthony: Raw Power first was in Corsica Studios in 2014 but not put on by me. It was always an idea of having a heavy, left-field festival that brought together the various Baba Yaga’s bands.

E&D: What have been the most valuable lessons for you since starting the festival?

Anthony: Hire really good staff to run it for you.

E&D: Has it been a challenge running Raw Power alongside shout work with Bab Yaga Hut and Corsica Studios?

Anthony: Yes, absolutely and this is the main reason we aren’t doing it anymore. Just not feasible to do a festival like this alongside a massively busy gig schedule for us.

E&D: What else have you got planned for the rest of the year after Raw Power?

Anthony: Well per my tickets here seems we have 35 gigs post Raw Power on sale so plenty of great stuff there. Got big shows with Clipping, Suzanne Ciani, Michael Rother and The Bug. As well as Tricot, My Disco, Hedvig Mollestat and a ton more. Pretty happy with how the scheduling is going.

E&D: What have been some of the biggest highlights in your your career so far?

Anthony: Think just still being here after 15 years and still booking the sort of acts that I want to week in, week out.