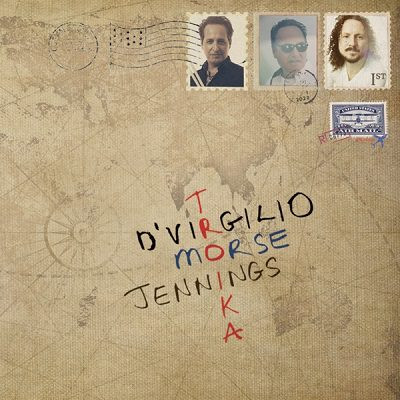 David Geffen, the man behind Asylum Records since 1971 was interviewed by “Whispering” Bob Harris on The Old Grey Whistle Test on January 9, 1973 and was asked on the background he’d experience with Asylum. “Before we started the record company,” David said to Bob, “Elliot (Roberts) and I were managing CSNY, Joni Mitchell, Laura Nyro…prior to that we were agents for many years with William Morris. So we’ve been involved with musicians for eight to ten years before we started the record company.”

Now say what you will about Geffen, but he and Elliot were part of the counterculture in the middle of the singer/songwriting scene and signing bands and artists raging from Jo Jo Gunne, The Eagles, Joni Mitchell, Linda Ronstadt, and the late, great Andrew Gold. And they still have an impact in the music scene many years later.

For Nick D’Virgilio (Big Big Train, Spock’s Beard), Neal Morse (Transatlantic, Spock’s Beard) and Haken’s Ross Jennings, this was a chance for them to move away from the prog-rock genre that they were known for and step into the waters of paying tribute if you will to the golden-era of the Asylum label with Troika.

Released on the InsideOut Music label, the trio wanted to bring a strong resemblance to the groups they were listening to when they were very young and knowing that this was the right time to carry the torch of the singer/songwriting textures that have power, hat-tipping momentum, and bringing out the big guns. The definition of Troika means a group of three working together in administrative or managerial capacity. So for Nick, Neal, and Ross, they pushed and pulled that mighty stallion to reach towards the mountain top.

Songs like the opening ‘Everything I Am’, ‘One Time Less’, and the flying gem ‘King for a Fay’ goes back between the sole self-titled CSN debut and Déjà Vu with gentle acoustic boundaries, harmonising vocals, thunderous riffs, and rising organ work that has all systems go! On the eighth track they go into the territories of Arena Rock between Styx and the excerpts from ELO’s ‘Concert for a Rainy Day’ on their 1977 opus, Out of the Blue.

‘You Set My Soul on Fire’ has a warm daybreak vibe to get you in the conga groove with nods to Hejira as you feel Jaco’s spirit in the song with romantic structures as Tony Levin lends a helping hand for a sing-along train ride to a new location on ‘If I Could’. ‘One Time Less’ sounds like a crossover from The Doobie Brothers’ ‘Listen to the Music’ and Steely Dan’s Can’t Buy a Thrill-era with acoustic crisp, sliding guitar touches, and organ morning beauty.

It tackles the themes on how to do things right and moving forwards into the next chapter of their lives with some down-home country blues. ‘Second Hand Sons’ starts off with some Hendrix-like powder keg from the Electric Ladyland sessions before Morse and D’Virgilio get down to business as they enter a combination between ‘Ma-Ma-Ma Belle’, the tense vibes of Boston’s Tom Scholz’s arrangements, and the lyrical textures from Jeff Lynne.

The closing track ‘What You Leave Behind’ feels like a continuation of where Fleetwood Mac’s ‘Landslide’ had left off as Ross brings a sense over the loss of a loved one, but the memories and spirit will guide them forever and ever. Letting them know that they’re watching out for them.

Troika is a fine release from InsideOut Music. It shows some of the principal consistencies that the trio have unfolded to the public. And it proves that they had reached their goals from who they really are and getting down to business.

For Nick, Neal, and Ross, they bring us along on a journey that’s waiting for us.