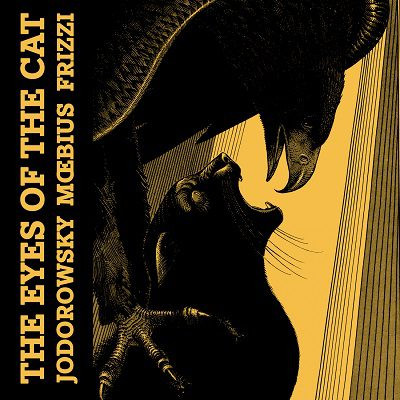 The Eyes of the Cat by Fabio Frizzi

Fabio Frizzi, when you look back at his collaboration with Italian horror maestro Lucio Fulci, you can definitely tell that it is a combination like no other. Similar to the partnerships between Tim Burton and Danny Elfman along with Dario Argento’s team effort with Italian prog-rock group Goblin, Frizzi’s score is like an alarm clock waiting to happen. From Zombi 2, City of the Living Dead, and The Beyond, you can’t deny his work.

This year on Cadabra Records, Frizzi has presented a score based on the graphic novel, The Eyes of the Cat by Alejandro Jodorowsky and the late, great Jean “Mœbius” Giraud. While Jodorowsky has made a name for himself as the Father of the Midnight Movies raging from El Topo, The Holy Mountain, and Santa Sangre, he has been championed by John Lennon & Yoko Ono, Peter Gabriel, Dennis Hopper, and Pink Floyd’s Roger Waters.

Mœbius has also been known for his amazing illustrations raging from the Western Comic Blueberry, Arzach, and the surreal artistic imagery between Heavy Metal, Marvel Comics, and working with Ridley Scott on the 1979 sci-fi/horror classic, Alien starring Sigourney Weaver. But for Alejandro during the mid-70s who had tried and failed to bring Frank Herbert’s Dune to life on the screen, he and Moebius would cross paths again in 1978.

While Alejandro and Mœbius tried their best with Dune, their first collaboration of the graphic storytelling in a futuristic landscape between a child, bird, and cat in this dystopian universe with Jodorowsky’s poetic story and Mœbius’ frames to life. What Frizzi had done is to create his own visionary score to the story as if it was this imaginative movie come to life.

Using a 1981 Roland Jupiter-8, 1971 minimoog, 1970 Mellotron M400, and a variety of Frizzi’s own collection of keyboards. And the result as the late, great Roger Ebert would described El Topo in the 2005 documentary of Stuart Samuels’ Midnight Movies: From the Margin to the Mainstream, “visually aligned that you can see them over and over like you listen to an album.”

From its horizonic sound of a Kraftwerk-sque atmosphere inside the dooming city with Mellotron cellos, filling up the voids on the opening track of ‘The City’, Frizzi’s imaginative views of the decaying world brings a sense over the loss of innocence before we are introduced to a curious black feline who becomes the prime target in this slap-bass turned thunderous electro-drum exercise for what is about to occur.

Cadabra Records · Track 2 – The Eyes of the Cat – The Cat

So while the mammal is at the wrong place, wrong time, he becomes the prey. ‘Meduz and the Crime’ starts off at first with a mournful string section for the first minute before Fabio goes to the bass synths to create this melodic jump by giving the bird a chance to launch the first attack. Like an increasive attack waiting to happen, the guitars setup the large-scale assault for the bird plucking the cat’s eyeballs.

The aftermath over the last section of the piece, brings forth a sense of loss, no sympathies, murder, and returning home to its master. ‘The Macabre Flight’ has a very Floydian-like atmosphere from the Wish You Were Here sessions as the spirit of Richard Wright flows in beautifully.

The drastic change of the Bird soaring over the once beloved Metropolis, transforms into a militant funeral arrangement as Frizzi tips his hat to Jodorowsky’s original 1970 score to El Topo on ‘Bajo Tierra (Under the Earth).’ The closing track of ‘The Child’ brings forth a dooming, fanfare epic-like turned sorrowing experience.

You hear a reprise of the ‘City’ coming in as the piano brings a very quiet segment before the structures sound of a grandfather clock, chiming away like crazy. Then the mellotron cello sets up this warm-like hope in the boy’s home before returning back into the landscape once more as both listeners and readers are asking ourselves, “Where do we go from here?”, “Why did the Bird attack and murdered the Cat?”, “Why did he do it?”, and “What will happen to the child when he gets older?”

While the story gives the Marvel Cinematic Universe the massive, enormous giant middle finger which it badly needed, Frizzi’s score on The Eyes of the Cat brings a sense of tragedy, non-comfort, pushing you over the edge, and psychomagic. Let’s hope that Fabio returns to do a score to The Incal or the two-part comic novel Sons of El Topo in the near future.