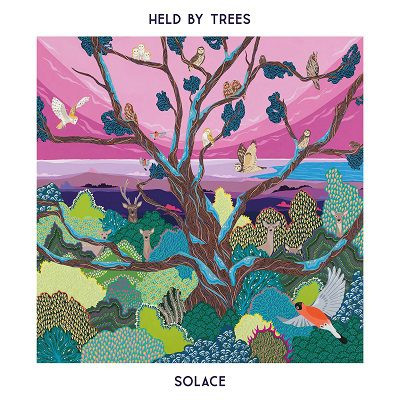 Solace by Held By Trees

With the passing of Mark Hollis on February 25th three years ago, it marked the end of an era. And the legacy of Talk Talk’s music will carry on as it will continue to influence many younger generations who are discovering the band’s music for the first time. For David Joseph, Held By Trees brings musicians who not only alumni of Talk Talk who worked with Hollis, but veterans who collaborated with Dire Straits, Pink Floyd, Super Furry Animals, and Nik Kershaw to name a few, gives Mark one final send-off in Solace.

Nicola Stockley’s cover is quite a thing of beauty that is inspired by the album covers of Laughing Stock and the Spirit of Eden. The themes behind Solace is about living in the genuine world. There are moments where it’s jazzy, ambient, and filled with hope. It brings us a balance on who you really are.

Listening to the album is like walking through the coolest part of the weather in the late 40s, early 50s which is perfect temperature levels whilst the music goes into a beautiful rainforest and witnessing a young man’s life on moving forward after losing a family member by showing consolation.

When I was listening to Solace, I felt the same situation by going through my personal struggles after losing my Mom last year. And it lifted me up and made me realise that she’s a guardian angel, watching over me. And for the music, it captures that same feeling of hope, loneliness, and carrying on.

While the first half has a sense of conscious, the second half puts us right in the middle of a storm. There’s the heavier and acoustic boundaries with a howling wolf, barking at the moon nonstop.

You get this notion of finally realising that reality starts to catch up with you as we see a glimpse of the stars at night after going through some heavy rain from the previous tracks. But once it becomes a bright and sunny day for a symphonic melody, listeners can finally make the journey home.

Solace is an emotional ride that’ll not only need repeatable listens, but a huge amount of Kleenex boxes that you’ll need as you try to remember the fond memories you had during your childhood with your parents. For Dave, it’s an amazing trip that’ll have you embark on this spiritual journey, again and again.