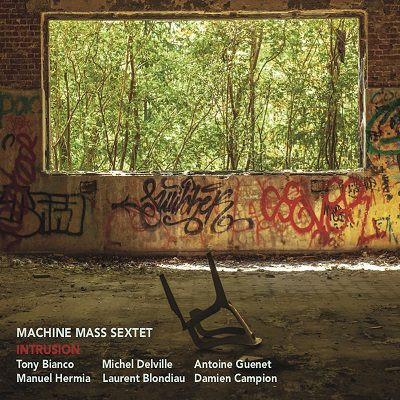 It’s been 11 years since Machine Mass launched. Made with American drummer Tony Bianco and Belgian guitarist Michel Delville that was originally a side-project of doubt. When you put on a Machine Mass album whether it’s Inti, As Real As Thinking, or their tribute album to Jimi Hendrix, it’s going to be one hell of a ride you’ll never forget.

Their music at times is like a massive cannon blast waiting to happen. And once it explodes, there’s no turning back. That and their official fourth studio album entitled Intrusion is a free-for-all spectacle that’ll hit your stomach with a massive punch.

Eight tracks which means six original tracks and two covers, Intrusion sees Machine Mass going from acoustic-jazz to crazy amounts of electrical churches that’ll get the Sunday morning attendees a real vibrative sound. Because you never what to expect once you put this bad boy on from beginning to end.

With Delville, he plays with fire. He sticks to his guns by going from one area to another. He’s not trying to be like Hendrix, but creating his own textures and be his own self.

Listen to ‘Not Another Loud Song’ for example. As the ensemble rises from their grave thanks to Bianco, Blondial’s wah-wah pedals he uses on his trumpet as a call-and-response to Hermia’s sax, Delville makes the arrangements into this crazed-out painting brought to life.

He plays these styles that have a middle-eastern scenario that’ll take you between the landscapes of India and the tombs of Egypt. Once the rhythm section kicks in to create this motif between the Soft Machine and Traffic, all bets are off for the sextet to kick it in high gear.

‘The Roll’ sees Campion, Hermia, and Bianco go into overdrive as Guenet channels McCoy Tyner’s playing. The composition feels like they’ve done a score to one of the Road Runner shorts in the 1950s with a fast-paced arrangement because you never know if Wile E. Coyote is going to catch him, come up with another plan, or just give up and go home.

Their take of Coltrane’s ‘Africa’ from his 1961 release Africa/Brass on the Impulse label, opens the album with a big-band vibe that the rhythm section creates thanks to Laurent and Manuel’s fanfare introduction. After the fanfare, Manuel channels the spirit of the master with a holy-shit-in-a-handbag momentum.

Just as Laurent comes in, Michel adds more fire to the heat levels more and more as he gives the horn section carte blanche to create even more extensions that are hot and pure. I couldn’t tell if they’re paying tribute to him or Delville’s nod to Present’s Roger Trigaux.

But if that’s a combination of the two, then that’s a hell of a way to start the album off with a big bang. Guenet’s composition of the title-track, takes a whole other level by taking his piano into these deep, dark passageways before the horn, double bass, and drum sections set up their nod to Robert Wyatt and Elton Dean with sun lifting momentum from Soft’s Third-era and Miles’ Jack Johnson period.

Laurent plays some of these alarming tones in the midsection by laying down the gave as he becomes the new judge in the courthouse as he’s making new rules so hard, that you have to oblige to them. You can almost tell that he plays his trumpet as the ancient musical horn of the Shofar that you would hear during Rosh Hashanah and Yom Kippur at synagogue.

After Manuel goes through a spiritual guidance, Antoine walks to the park with a Guaraldi-like vibrance whilst the wah-wah pedals bring in the Canterbury touches that’ll make you want to dig out those records once more. Campion’s ‘Intro’ continues where ‘Acknowledgement’ had left off with Jimmy Garrison’s spirit watching over him knowing that he’s got it down to a “T”.

Meanwhile, the climatic tidal waving destructions of ‘ED’ and the late Jow Zawinul’s cover of ‘In a Silent Way’ will make you go on this roller-coaster ride that’ll make you shit your pants, nonstop! Intrusion is Machine Mass’ stick of dynamite that is finally ready to explode.

It shows how much time and practice they brought to their fourth album. So if you think this is going to be just a “smooth-jazz” release, guess what, you’ve come to the wrong place.