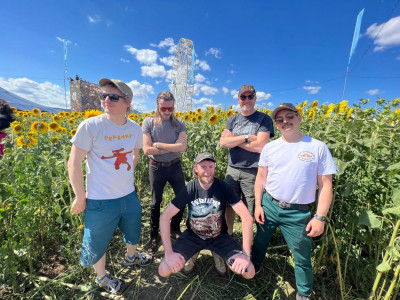 Sincerely, it's an honour, if not a little mind boggling. Some of our best memories playing in a band have been created performing at Raw Power and we're very much looking forward to making some more.

Matt: Raw Power festival captures the zeitgeist of the more out-there scenes in the UK and beyond. It’s basically a gathering of all the best people involved in facilitating the healthy existence of leftfield music, from musicians and bands to promoters, labels and avid gig goers. It’s all the best people in one place.

E&D: What are some of the things we can expect from your set at this year’s Raw Power?

Matt: Given the run of festivals we’ve had over the summer everything feels like it’s really locked in. We also have more amps, more cabs, more of everything.

E&D: How does it feel to be back this year and playing a headline set at the festival?

Matt: Sincerely, it’s an honour, if not a little mind boggling. Some of our best memories playing in a band have been created performing at Raw Power and we’re very much looking forward to making some more.

E&D: What performances that you have seen have been the most memorable at the festival over the years?

E&D: Who else are you looking forward to checking out at this year’s festival?

Matt: Unfortunately we’re only going to make it to the festival on the day we play but personally I’m hoping to catch Cocaine Piss, JOHN, THANK and Dave Terry.

E&D: If you could curate a day at the festival, who would you have playing?

E&D: What has been the biggest display of raw power that you have ever seen in a live setting?

Matt: Lars Ulrich in artist catering at Roskilde 2018 eating more chicken nuggets than should be humanly possible while several people massaged his back with butter.

Matt: Loads of festivals – Rock Altitude in Switzerland, Sonic Blast in Portugal, End Of The Road, Krakenhaus, Future Now… there’s a few more that I can’t remember off the top of my head. My calendar is a mess… an exciting mess though.

E&D: What have been some of the most memorable gigs that you’ve ever played?

E&D: What has been the most chaotic show that you’ve ever played?

Matt: Chaotic as in loads of things going wrong? Probably Glastonbury this year.

E&D: What is the status about a follow up to your last album Viscerals?

Matt: The next album is recorded and mastered. We’re working on release timelines and what not now with the label. More news soon.

E&D: Have you been pleased with how that album has been received?

Matt: Of course. The reception to this band in general has been and continues to be more than I ever could have dreamed of.

E&D: Who are your favourite ever bands to come from Newcastle?

E&D: As Newcastle United fans, how do you think the team will do this season?

Matt: Just anywhere top 10 would be huge, I think they’ll be there or thereabouts. It’s very strange watching a Newcastle team who can string a few forward passes together. Going to take some getting used to.

E&D: What do you want to achieve with the band in the future?

Matt: Sustainability. Really, I try not look too far down the road in terms of what this band can achieve. I continue to be surprised by the situations we find ourselves in and long may that continue. I guess there’s a couple of things that were on the horizon that the pandemic put the breaks on, so it’d be nice to pick some of that up again. Touring the US is one of those things.