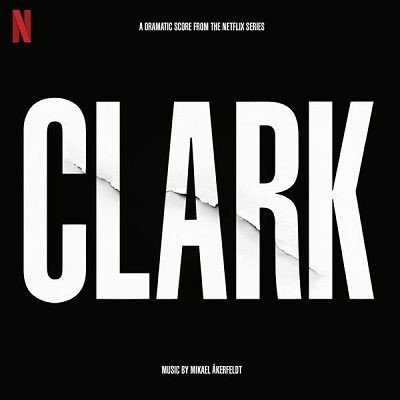 Clark (A Dramatic Score from the Netflix Series) by Mikael Åkerfeldt

Mikael Åkerfeldt has made a name for himself between as the primary songwriter for Opeth for 32 years. From death to prog metal, various line-up changes, the band is still going stronger. But it’s more than Opeth. He has collaborated with his partner-in-crime Steven Wilson on the 2012 release of the dark experimental folk release of Storm Corrosion’s sole self-titled release. And appearing with other bands, artists, and projects from Ayreon, Devin Townsend, OSI, and Candlemass, Mikael shows no sign of stopping.

But when it comes to scoring, that’s where you start to take notice. His score for the streaming Netflix series Clark, Mikael dives into the water to take a stab of creating music around the true story of Clark Oderth Olofsson starring Bill Skarsgård in the title role.

Well organised and going into the forms of the library music textures from De Wolfe Music, Mikael takes listeners into the mind of a complicated character who not only received sentences for robbery, attempted murder, and was the first celebrity gangster in Sweden. Listening to the music, you can tell that
Mikael took notice from the realms of the father of midnight movies himself, Alejandro Jodorowsky.

Take for example, the middle-eastern ride into the tundra of ‘La Shay’ Jadid That Alshams’. Here, Mikael calls upon the spirit of Barış Manço floating into view as he channels the styles of ‘Lambaya Püf De!’ while walking into a time traveling section of Paris in the 1950s as the jazz scene was growing for the ‘Rockefellers’ to kick in the grooves with some swinging mellotron blues.

‘Tango Bizarre’ becomes a dance to the death with an eerie situation that’ll make you feel to be taking the task before settling into that acoustic warm beauty on a boat by taking a ‘Sea Slumber’. He lays down some beautiful textures by going back and forth between acoustic and electric guitars by making the sun go down in some bluesy arrangement.

After going from tangos to swimming, he comes to shore by putting on the original outfit that Clint Eastwood wore from Sergio Leone’s Dollar trilogy. Walking into a final showdown at the O.K. Corral with a spaghetti western waltz on ‘Then’, Mikael swings for the Goblin jugular for an action-packed scene in ‘The Hunted Are in the Clear’.

You can hear some of the Gentle Giant forms on here, but holy shit in a handbag, Mikael knows how to pack a punch before finding some tricky places to hide from the police. And then, all of a sudden, he enters into Herbie Hancock’s territory from the Headhunters-era between these killer wah-wah improv’s and clock-ticking drum patterns with keyboards being chased in this crazy town for the ‘Funky Children’ and finding a ‘Code to the Vault’.

Now this is where he walks into the sessions of the French Duo Air as they were in the middle of recording music to Sofia Coppola’s first full-length motion picture of The Virgin Suicides. We witness a symphonic-flamenco landscape into giving the last rite by saying goodbye on ‘Rags to Riche’.

From there, we go to the cemetery to say farewell to our loved ones as Mikael pours his heart and soul on the ‘Mother of One’ before heading towards the deep, dark concerto tunnels on a ‘Ode to Confusion in A minor’. Now he heads back to Earth by singing in the styles of the early Sabbath sound on ‘Måndag i Stockholm’.

You can tell how much his metal roots didn’t leave him, because it’s been with him since he was very young. He brings all of the ammunition he has brought to the kitchen table and starting to raise hell at any second.

Clark is quite the ride. Yes there will be a dividing line the sand among the hardcore fans of Opeth who want him to sing rather than write music for a series, but this proves that he’s more than just a guitarist and singer. He brings it all out there.

It is a roller-coaster ride that’ll make you want to re-watch the miniseries again and again to be a part of both the title character and Mikael’s journey, waiting for you.