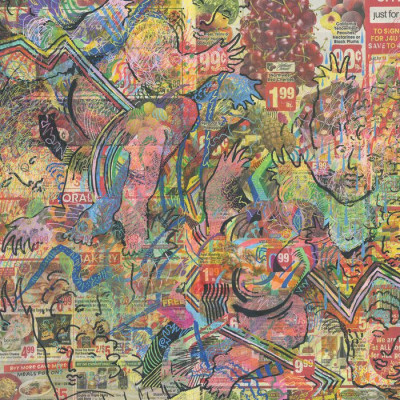 Thyrsis of Etna by MISZCZYK

To many, The name of Ontario producer MISZCZYK might not be a known commodity. After all, Thyrsis of Etna, is his debut album.

Yet, as ‘In The Dark’ opens the album, many will recognize the inimitable voice of Stereolab’s Laetitia Sadier. Later on, that of Pylon’s Vanessa Briscoe Hay, or singer-songwriter, Chaad VaGaalen and a few others who MISZCZYK was able to gather for this project.

Ok, maybe he’s a very good friend with all of them, but even that would not be good enough to get them to play and/or sing on your record album, particularly a debut, if your music is up to scratch.

As the almost kaleidoscopic cover of the album indicates, so is MISZCZYK’s music here. He explains his concept: “Giving everybody the creative freedom to do whatever they wanted to be meant that I was inviting chaos as a bedfellow,” says MISZCZYK. “Somehow, welcoming 16 different singers to have their way with the music created a vibe that was more than anything I could have asked for.”

After getting in the contributions from the artists involved, MISZCZYK fused analog and electronic sources to achieve the music he envisaged in the first place.

Of course, when you have disparate musicians coming up with disparate musical concepts In many cases, there is a great possibility that the end musical result will be – well, disparate and disjointed.

Yet, MISZCZYK is able to find a common thread and present it here as a unified musical concept and turn it into quite a treat.