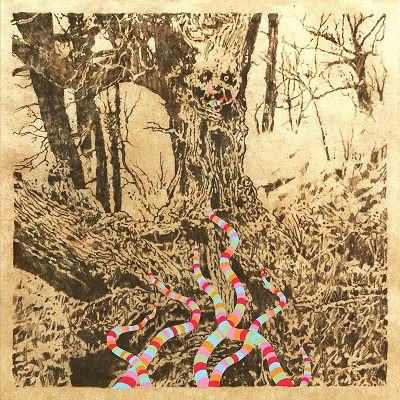 Jarrod Gosling shows no sign of stopping when it comes to Regal Worm. Following up to 2021’s The Hideous Goblink, their next release will prepare you to take a massive amount of ‘shrooms, hypnotic voyages, trip-hop hallucinations, and insane light-speeding adventures of Worm! Putting this album on is like watching the Space Madness trilogy from Ren & Stimpy with a score that’ll hurl you through the cosmos.

Gosling is like a mad scientist, cooking up more strange experiments that’ll have both Andy Votel and The Amorphous Androgynous jumping for joy and be very excited to see what Regal Worm has brought from their laboratory. From the chanting light-speeding adventures this is almost a call-and-response chant between the Canterbury scene, killer Fripp-like sounds, and Magma’s Christian Vander on ‘Regal Wishbone’, the band make the jump to sub-light speed like no other!

Once they make the landing for a spacey melodic approach in the styles of Gruff Rhys’ textures on ‘Don’t Freak Out the Creatures’, it becomes a swinging spaced-out jazz rocker that Atkinson and Somerset do in this dueling sax improv for a brief moment. You can hear some of those early Soft Machine momentum with higher attitudes near the last section of the piece before going back on their ship to do more research on this strange planet.

Both ‘Dindy Super’ and the speeding folk-run of ‘The Steppe Nomad Space Program’, sounds like an alternate score to the Bugs Bunny 1943 short, Falling Hare from the Clampett-era with some crazy tripped out synths and drum work that Gosling creates by adding some of the craziness that the Gremlin tries to make the rabbit’s life a living hell. You can imagine Gosling took inspirations of the Looney Tunes shorts from the early ’40s to create his own musical vision on how crazy Bugs Bunny was during that time frame with anarchy, attitude, and excitement during the War period.

‘Bong Song’ returns to the swinging Canterbury taste between early Caravan, Votel’s Finders Keepers record collection, and the first two albums from Egg in a melting pot, bubbling with a lot of delicious mellotrons and the wah-wah’s answer to the Red Velvet Cake for desert. The sax section comes back with a vengeance in an electro-garage rock ‘60s attitude inside a boxing match for your own taste of the ‘Chlorophyllia’.

‘Green Beetle, Plate 31’ is a process of the Italian ‘60s sci-fi, action/crime films that comes to mind with chase sequences and the scores from the realms of Neil Hefti and Ennio Morricone’s arrangements as they go for the attack while the questionnaire ‘Is There Anything Than a Black Cat?’ becomes this spiralling staircase journey into the unknown.

‘Hop’ feels like it could’ve been recorded during the golden-era of the swirling Vertigo label in the early ‘70s as you do some of these crazy dances from the late ‘50s, early ‘60s with unexpected twists and turns until the very end. With a soft landing back to Earth, Regal Worm have proven themselves that
they have completed their research with a job well done.

And believe me, if you want to be a part of Gosling’s journey, it’s going to be a roller-coaster ride you’ll never forget. Because it’s going to be one
crazy mo-fo like there’s no tomorrow.