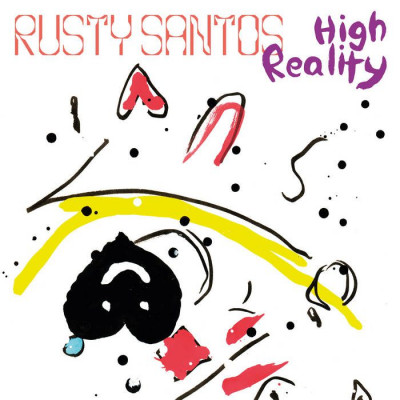 Those closely following the musical adventures of The Animal Collective and the solo ventures of its members, like those of Panda Bear, or artists like Black Dice will certainly be familiar with the name of LA producer and musician Rusty Santos.

As Santos presents it, the album ‘contemplates one’s place in the universe, mental health struggles and our relationships with others.’

So why that serious, deeply thinking element? Actually, there was a jarring series of events that led to the creation of this album and Santos explains them: ‘These songs were created from a place of necessity after I had been hospitalised and involuntarily held in a facility due to a psychotic break, which was brought on by tactics I faced by others in the music industry. It took the efforts of some artist friends and label contacts I work with to intervene and get me released. The people in charge at the facility didn’t believe I was a record producer. The album title, High Reality, is the name I’ve given to the state of consciousness I was in while detached from day-to-day reality during my crisis.’

Actually, Santos was able to express the seriousness of the situation he found himself in through both the music and the lyrics here through some seemingly easy to the ear sounds that actually go much deeper than their ‘surface,’ quite a feat in itself.