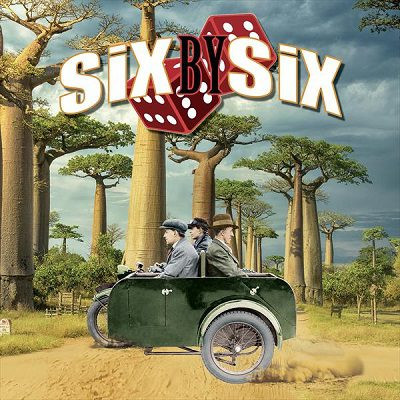 The moment ‘Yearning to Fly’ begins the album off with a bigger bang, at first you think it’s Todd Rundgren’s Utopia, but once the ignition kicks in, the wings are ready to be spread. The challenge to fly across the sky can be tricky, but from the mind of a three piece called Six By Six, you know something wonderful is about to happen.

Combining multi-instrumentalist Robert Berry (3, The Greg Kihn Band, and Ambrosia), Saga guitarist Ian Crichton, and Saxon drummer Nigel Glockler, you can’t go wrong with a line-up like that. The themes on the albums structure details the struggle of a person’s everyday life.

Whether it’s being cooped up during the pandemic or the crises that’s going on in the outside world we have to endure watching every cable news network seeing the left and right arguing like professional wrestlers in the WWE. For Berry, Crichton, and Glockler, Six By Six’s self-titled release on the InsideOut Music label is a salient gem that has come to life.

Tidal-waving arrangements on ‘The Upside of Down’ becomes this clock-ticking composition. You feel the sense of getting out and understanding that being in lockdown two years ago can reach a breaking point. Berry’s bass and Crichton’s riffs, set up the hopes of breaking the doors down with an iron fist and being free to look at the sun for the first time in all of its glory.

But there’s a moment on ‘Casino’ where Berry goes into this delicious course meal of the rock progressivo Italiano scene on his keyboard channeling Premiata Forneria Marconi’s first two albums (Storia di un Minuto and Per un Amico) in the midsection as Crichton walks into the territories of Lindsey Buckingham’s fingerpicking textures.

Not only there’s the P.F.M influences, but the Hot Rats-era comes to mind as Berry plays in the styles of Ian Underwood’s keyboard cutaway on Frank Zappa’s ‘Peaches En Regalia’. It’s such a moving piece that the three members have a strong sense of a brotherhood in Six By Six.

‘The Last Words on Earth’ has the spirit of the late, great Keith Emerson on the intro. You can imagine Keith is watching over Berry playing this classical church organ textures as he points to the sky letting him know that he hasn’t forgotten him. It shines so brightly, that the fires burn with intensive heat from heavy riffs and drum patterns setting up the final seconds of the doomsday clock waiting for our home planet to be destroyed.

Now I can’t tell whether it’s Berry or Crichton’s guitar making it sound like a howling cry across the landscapes for a ‘Reason to Feel Calm Again’, but it brings forth the essence of Terje Rypdal by bringing awareness and the next long and winding road for the person’s life to see where the future will bring for him. Not only there’s the Iron Maiden influence with a sky soaring improv, but Glockler brings forth the New Wave of British Heavy Metal sound to the forefront.

It shows that he hasn’t forgotten his roots during that time frame when the metal scene was resurrected during the late ’70s at the time punk was happening. Believe me when I heard that track, I felt a tug to the NWOBHM movement that Nigel was paying homage to his fellow comrades in the song.

But once they close up shop, they have a tiny bit of energy in their veins to ‘Save the Night’ with crazy time changes. There’s the Close to the Edge sound, Garth Brooks’ ‘Callin’ Baton Rouge’, and a gigantic spark of an invigorating solo work, followed by the angelic harmony throughout the vocals with fade out, fade in sections, and closing the curtain with enormous applause.