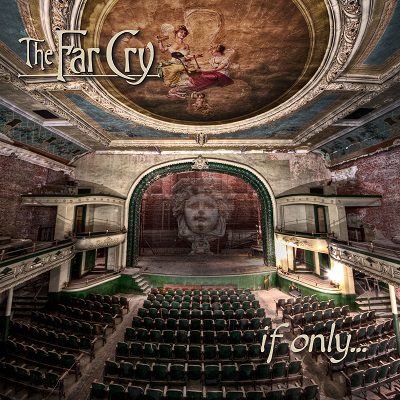 Formed in 2013 in Connecticut by Jeff Brewer and Robert Hutchinson who crossed paths in 1976 playing in a covers band, members of the prog group Holding Patterns from 1980 to 1983, The Far Cry’s music is like a cinematic voyage waiting to happen. Their debut release If Only is an adventure exploring this parallel universe of a dystopian landscape we’re trapped inside of.

The quartet have unleashed eight compositions, three clocking in at 11, 13, and 16 minutes with stories that have a Huxley meets Orwellian atmosphere. Take the first two tracks; the opening track ‘The Mask of Deception’ and ‘Programophone’, the band tackle the Belew-era from King Crimson like a mad scientist cooking up some strange experiments inside their laboratories.

You have the textures raging from Collin’s unexpected time changes from a ticking time-bomb waiting to explode, setting up this alarming effect for Brewer detailing this hero who has a strong outspoken political background, taking down the government. But little does everyone know, he’s using them as bait so that he rule the city with an iron fist and make them slaves.

Then Hutchinson lays down this insane rap groove in the styles of ‘Thela Hun Gingeet’ detailing the madness with some patterns of the Mr. Bungle years with fanfare organ techniques from Dabbo. It’s a weird combination to mix in that ‘Powerhouse’ sound that has been used during the 1940s Bugs Bunny shorts from the Clampett-era, but it works!

Collin gives the band members a break as he opens up his acoustic guitar to dive upon the Suwanee River for a ‘Winterlude’ before the band rev up their engines by heading towards the light on ‘Simple Measures’. I can hear the textures of Starcastle’s first two albums that comes to mind that The Far Cry channel in the 13-minute epic.

Brewer gets down to business by playing some of these insane bass lines before Collin lends a helping hand to tackle those arpeggiated textures as if Steve Hackett came in to work on the production levels for Iron Maiden’s next follow-up. As they prepare for battle that is coming over the horizon, Dabbo sets up this moody improvisation that has a ‘Swan of Tuonela’ approach, knowing that this will be an exhausting war they have to embark on.

You feel the tension, intensity, and vibrative rhythms with an epic scenery. There are some amazing textures that the four maestros bring into the forefront, knowing how much homework they’ve done before bringing it all home in the last three minutes.

Then, Dabbo takes center stage as Collin leads the way with his motorcycling, revving arranging riffs on ‘The Missing Floor’. Chris showcases his incredible work to go from classical to nightmarish worlds for our troubles to burst through the closets as the skeletons and the white elephant are revealing to the public and media the big massive lie, the revolutionary man has done to his followers.

‘Winterlude Waning’ is another calming effect after the previous two tracks to give Dabbo a final reprise by seeing the sun coming through the dark, grey clouds by giving a sense of a new chapter awaiting for us in the next chapter. The title-track returns to those exotic locations that brings forth; Patrick Moraz’s The Story of I, Ottmar Liebert, Yes’ Tales from Topographic Oceans, medieval styles from Gentle Giant, and a Celtic orientation that is ready for the weekend.

This is where they really have all of that energy released and go for that massive jugular before bringing it all home on the ‘Dream Dancer’. Like something straight out of the Spotted Peccary label, the closing piece walks into this watery landscape filled with beauty, hope, and witnessing the ballet dancer creating different positions over the art form of gliding to unknown heights across the clear blue sky.