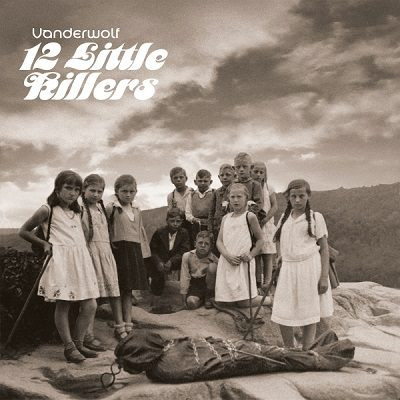 “I dreamed I was a hero/and filling in every task/steadfast with an answer for/everything you ask.” When you read a lyric like that from the opening track of ‘I Am Not a Mountain’, there are some beautiful textures coming from the realms of Marc Bolan from T. Rex during the time he was recording the sessions from his magnum opus, Electric Warrior. With its folky, fantasy-like 12-bar bluesy groove, its gets you up-and-running to start the morning off with a delicious cup of coffee.

For Max Vanderwolf, he brings a sense of a psychedelia smoothie that is waiting for us to drink until the last drop. His latest release 12 Little Killers, is quite the trip. Now some of you may ask, “Zach, who in god’s grey earth is Vanderwolf? Is he a superhero from the DC or Marvel Universe, a country singer, or an actor?” Well my dear listener, are you now sitting comftybold two square on your botty? Then I’ll begin.

Vanderwolf’s music spawns from various genres. Raging from the blues, ballads, folk, and prog opuses. He’s a New Yorker, working in London, and residing in Los Angeles for about two years now. He has recorded albums, songs (most of them that haven’t been released), and was a vocalist for the London group, Last Man Standing.

And not to mention as a music programmer and concert producer, overseeing the underground scene from New York’s Knitting Factory to London’s Royal Festival Hall where he worked with bands and artists such as Massive Attack, Jarvis Cocker, Patti Smith, and the late, great David Bowie. With 12 Little Killers, he pounds the gavel in the courthouse as he becomes the new judge, taking over the law with an iron fist.

It is a raw, volcanic, energetic, and powerful release that’ll hit you in the stomach so hard, it’ll keep your ass up for the next listens that await you in seven enduring centrepieces. ‘NYC’ has a strong love letter to Max’s hometown with a vaudeville twist.

The way he approaches the textures between Alice Cooper, Jim Croce, and Harry Nilsson’s songwriting complex, you can feel the spirit of the last two heroes, watching over him, knowing that he’s got the tones down well. ‘Something For Nothing’ goes for the Dylan ‘60s electric groove with a punky, garage-rock attitude that’ll make you want to pick up a guitar and get down to business.

Not to mention the harmonising vocals channeling the Eagles’ classic, ‘Witchy Woman’. Both ‘Glisten’ and ‘Walking Away’ are these spaced out voyages with a folk-like, hands-down, singer-songwriting approach of an ominous story line. You feel the craziness and isolated feels coming at you as you become locked away from the outside world.

When you think of the song ‘Headway’ thanks to its droning moog-like spiritual guidance and trip-hop drum patterns, it puts you through this meditated devise and the trance has suddenly become a peaceful atmosphere. Things for a change as we witness a romance gone horribly wrong with brutal sequences to make it a wreaking havoc of a hotel room in sudden destruction on ‘Ain’t Gonna Hurt’.

We witness Max pleads and fighting back tears in the midsection for his loved one to come back with heavy guitar licks that resembles both Mick Ronson and Brian May, knowing that she has moved on in her life. And after the disaster that’s occurred, we see the character drinking a massive amount of alcohol nonstop by killing himself and be free from the pain and suffering he went through.

When Max closes up shop on ‘Somebody’s Lovesong’, he channels both Gram Parsons and John Lennon in his own take of the 1952 romantic ballad, ‘You Belong To Me’. There is a driven home segment of seeing Vanderwolf taking long way out of the Nevada desert and moving into the bright, California lights that await for him.

The detailed story-like compositions has a reflection on looking back in the past and present with songs that’ll make you want to go back and revisit the album again and again to see what you’re missing. And for us, Max himself has made his own cult-like midnight movie for moviegoers to see over and over frequently and would have given Rocky Horror a run for its own money.