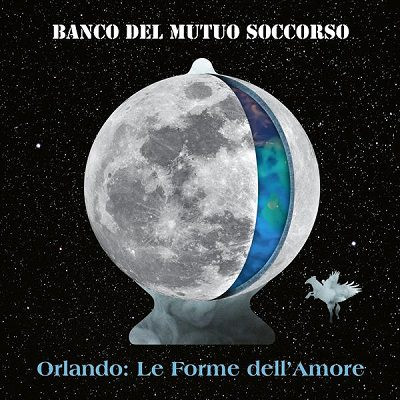 What better way for Banco Del Mutuo Soccorso to put an album out, following not only their 2019 release Transiberiana with Tony D’Alessio filling the magnificent pipes of the late, great Francesco di Giacomo, but marking the 50th anniversary of their most ambitious conceptual release Darwin! The new album Orlando: Le Forme dell’Amore is the band returning to their conceptual stories once more.

Years in the making, Vittorio Nocenzi worked on this project with help from his son Michelangelo and lyricist Paolo Lugli. Based on the 14th century poem by Ludovico Ariosoto, it detail the facts and ideals for a mountain to climb.

For Banco, they show no sign of stopping. You can feel the spirit of Francesco in the album as you can imagine him being pleased to see them going. They have stayed true to their roots and given the Italian Prog genre, a real kick in the gut. With Orlando, they take listeners on a magic carpet ride, made in the design of the famous piggy bank which has been a part of Banco’s staple since their sole self-titled debut release the same year in 1972.

From the epic introduction of ‘Proemio’ that start things off with a bang, to the Mediterranean turned complexing wonders of ‘La Pianura Rossa’, Nocenzi brings out the big guns to make it more of a shaky earthquake for Moresco, Capozi, and the dueling guitarists of Marcheggiani and Di Già, make the Earth’s atmosphere shake like crazy!

Then comes the intense tango-sque vibes with a Stravinsky twist that Banco creates on both ‘Non Serve Tremare’ and ‘Non Mi Spaventa Piu L’amore’. Here, they bring the flaming fires of the dance to life with pounding piano work, acoustic chords, rumbling organ work, and Tony setting up the dangerous tightrope that is happening right in front of our eyes.

Meanwhile, everything comes to a screeching halt as they go into this amazing train ride to ‘Le Anime Deserte Del Mondo’. You get a sense of everything calming down as the band take this massive exercise in the styles of a bossa-nova groove. But just as the train takes them to the next stop, ‘Cadere O Volare’ returns to their third release, Io Sono Nato Libero.

With a Gentle Giant vibe, creating these unexpected time changes, it becomes a cat-and-mouse chase. Once the mood goes into one location after another, that’s where the band members go upwards to the mountain top before the sun comes out with a symphonic ballad.

‘Non Credere Alla Luna’ sees a tribute to one of the most complicated, but the powerful priestess of soul, Nina Simone. You can hear essences of ‘Feeling Good’ in the song thanks to Vittorio’s smoky piano work.

You can just close your eyes and imagine yourself in the late ‘50s in a Paris jazz club with Nina there giving out signals to each of the band members before it blares out this wildly sax improve as Tony lifts her spirit up in his vocal arrangements.

It segues into the ‘Moon Suite’ as Vittorio returns to the magic once more playing in this loop-like spiral between him and Moresco’s drum work, catching up with him in hot pursuit. The midsection walks into the early Genesis and Zappa-like complexes that transforms itself into a red, hot, flaming comet heading towards Earth nonstop before it takes a huge acoustic break.

Clock-ticking effects and mournful piano sequences, you get a sense of being lost in space without any chance of returning home. The organ and heavy lead/guitar riff section comes in for a brief moment to go into the golden-era of the swirling Vertigo label before ending with a backward tape effect and realising it was all just a dream.

Banco’s music will never go away, it will stay with you, inside your heart, forever and ever. Orlando is a picture-sque release that is worth repeatable listens to keep in touch with the story. Yes it may be challenging, but they have proven themselves that 50 years later, they’re a band that’ll never let the spirit die.