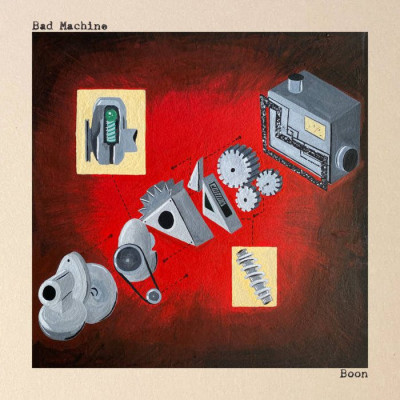 Philadelphia’s Boon started out as a more or less loose collective of friends and collaborators that played melodically and rhythmically structured music.

Yet, with their last two albums, including their latest, Bad Machine, the band has settled their lineup (Brendan Principato, Andrew Senken, Drew Sher, and Dan Lynch) but have gone for a bit more loose structures, in some ways, quite akin to what Animal Collective are doing.

Still, the intricate melodic and rhythmical patterns are still there and in quite a force, particularly vivid on tracks like ‘Talking To’ or ‘Figure It Out’, or practically everywhere across this album. In many ways, the band simply plunged into a musical turmoil trying to make full sense of it all.

As Principato put it, “This time around, with a solidified lineup and renewed resolve, we decided to lean into the chaos. Rather than trying to control where the songs were going to end up, we recorded the skeletons of the songs in a single day and let the tracks blossom naturally.”

And almost every time you do exactly what Boon did on Bad Machine let things blossom naturally, and things work out almost in the best possible way – instead of musical chaos, you get musical excellence.