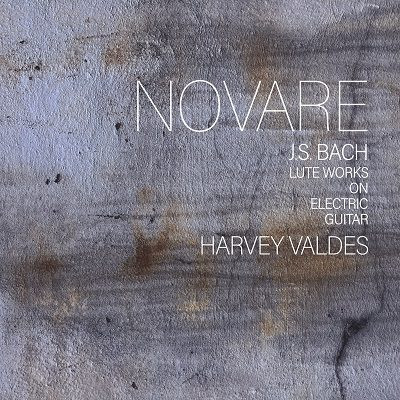 Championed by both Andy Summers from Dantalian’s Chariot and The Police, followed by Sonar and Bowie alumni David Torn, Valdes earned a BFA degree from The New School for Jaz and Contemporary Music whilst working with artists such as Butch Morris, Karl Berger, and Middle Eastern/Balkan ensemble Anistar. He also worked in the New York Theater as well.

From the Tony-Award winning The Band’s Visit to the downtown theater ensemble The Wooster Production of Cavalli’s 1640 opera La Didone which he provided a modern interpretation of the Baroque lute, electric guitars and guitar synthesisers. Valdes is a very busy, busy man when it comes to his music.

Now let’s get into the Lute works of Bach’s composition that he’s interpreted on the modern-steel electric strings he’s brought to the kitchen table. Listening to this album, you can just vision the ECM label whilst Harvey brings an understanding to the suites in C minor, the Preludes, and fugues from E-flat to G minor.

He plays very gently and fingerpicks very well on his Teuffel Tesla 6-string guitar, built by Ulrich Teuffel himself. In an interview with Anthony Garone on Make Weird Music recorded on May 4th of that year, one of the questions from Paul Richards of the California Guitar Trio asked Harvey on how gets that almost “acoustic” sound with his electric guitar.

He describes the various sections, cabinets, and dynamics to create the sound with a lot of reverb, followed by an acoustic dimension to make an atmosphere with the tones he glued to his instrument. You can vision those sounds as if you’re in a cool, relaxed environment, getting away from the big city into somewhere that’s calm and quiet in a 400 acre land in the outskirts of Utah, Wisconsin, Arkansas, and deep in the heart of Texas.

When you think of Bach, you think of the shredding god of Power Metal himself, Yngwie Malmsteen. But for Harvey doesn’t do that. As I’ve mentioned earlier, he brings a gentler approach to Bach’s vision. And this is not bad mouthing Yngwie, but it is to give Yngwie a chance to take a break, so that he can have his fingers relaxed whilst letting Harvey take the stand and make his own Bach album. It is also the perfect antidote for sleep music when it’s time to go to bed.

Valdes is going to be up there with Robert Fripp, Terje Rypdal, Alex Lifeson, and the late, great Michael Hedges. When those compositions of Bach’s Lute, it will become the perfect guidance to understand the real foundation of classical music. And for us, we get to experience those visions by Harvey Valdes, start to finish.