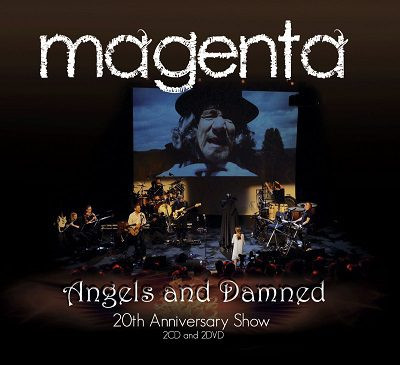 For 23 years, Magenta has captivated listeners by taking a step into the waters of progressive rock. Launched by ex-Cyan member Rob Reed, the band is still going stronger than ever. From 2001 to 2020, their music has a combination of not just the four letter P-word, but aspects of alternative music, epic scores, and blistering beauty that would make you understand why they keep that machine going.

Not only Magenta are like a train that won’t stop, but incredible 2-CD/2-DVD set recorded at the Arlington Arts Centre in Newbury, England on May 19, 2019, brings the story in full for their 20th anniversary. Not only has the band performing medleys of Home almost in its entirety and highlights from their seven studio releases, but help from people like Peter Jones from Tiger Moth Tales, percussionist Simon Brittlebank, oboist Karla Powell, flautist Katie
Axelsen, and the late David Longdon of Big Big Train are there lending Magenta a helping hand at the venue.

As I’ve mentioned before, Magenta aren’t just a prog-rock band, but they’re more like a family working together as a team. For them performing at the Arts Centre, it is a front-row seat, witnessing the band performing their music, and bringing it all home for their fans. From the insane time changes of ‘Gluttony’ with a soaring sky of bright organ and guitar-driven for the next century to come, Christina, Rob, Chris, Dan, and Jiffy take audiences for a night they’ll never forget.

With its midsection paying nod to Supertramp’s Crime of the Century-era with a harder edge rocking eruption, Fry and Reed bring out the big guns before Booth spreads her wings once more to fly over the mountains with her incredible vocal lines. The sombering struggles to carry on for the piano ballad between ‘Moving On’ has a very gospel affect that Christina brings her heart and soul of a woman who not only is going through a deep, dark depression, but knowing that there’s no turning back in where the next chapter awaits her.

But once Fry heads upwards into the air with his electric guitars into landscaping beauties for Reed to go “WHOOSH!” on his keyboards on ‘Demons’ in the first two minutes, they head back down to Earth for a bluesy-sque rain pour channeling Stevie Ray Vaughan with an orchestral vibe for Booth to erupt out of a volcano and heading towards our solar system.

‘Journey’s End’ sees Reed going into a Premiata Forneria Marconi route for an introduction during the Chocolate Kings period as you can imagine Booth walking in the sidewalks at the heart of New York City. You can imagine the crowd being in awe of the band bringing the first act home as Fry makes his guitar cry before going into a mournful flamenco structure and then getting ready to make the journey back home, Magenta ignite their engines by bringing the symphony vibes that resembles Renaissance’s golden years in the 1970s.

Then, after the Home medley, Reed brings in the dark clouds for the short version of ‘Trojan’ as hell has come forth on 2017’s We Are Seven. You can hear the Floyd structures mixed in with a battle cry into the fields against the robotic machines to take over the human race. Jiffy brings in the machine gun ammunition by pounding like crazy on his drum kit, knowing that this battle is going to be a long, long time until one of them raises the white flag at Newbury.

Meanwhile on ‘Pearl’, which is a tribute to the late great Janis Joplin from The Twenty-Seven Club, Magenta sings in the style of California’s own Comets on Fire’s composition, ‘Lucifer’s Memory’. It was quite a surprise for the band to go into this alternative route to show that they were more than just the epic songs that they’ve been known for.

Reed, Jiffy, and Fry are like a band of brothers to cry out to the angels as the lights flicker from one corner to another and witnessing the first queen of rock ‘n’ roll in the late ‘60s while reaching out to Jim Morrison’s spirit with more unexpected changes as Reed leads the band and audiences bow before ‘The Lizard King’ as he follows them to be free from the pain and suffering they’ve went through.

Jones’ sax improvisation on ‘The Ballad of Samuel Layne’ adds an incredible relaxing momentum to channel the last section on the fifth part of ‘Shine On You Crazy Diamond.’ Magenta gives Peter a lot of carte blanche and knowing that they’ve got his back to expect the waves to crash at any second. Once the wave’s crash, Booth just goes at it to bring that ray of light into the Arts Centre and finally see the sun in its true glory.

But one of the best moments is their cover of Steve Hackett’s ‘Spectral Mornings’ from his third studio release in 1979 on the Charisma label. Rob had done this before back in 2015 as an EP for Esoteric Antenna in aid of the Parkinson’s Society UK. And for Longdon and Booth performing a duet together with Jones on backing vocals, they’ve come full circle.

You can feel the chemistry between David and Christina as they blend well together to bring Hackett’s composition to life. And for Jones, his solos are beautiful, mysterious and amazing to give it that electrical jolt which it needed. And it’s an astonishing take that he gives to the performance.

Angels and Damned is a one of a kind release that Magenta has unleashed. It has all of the ambition, capacity, vigor, and force the band have brought to Newbury, England. It’s been a while I’ve listened to Magenta’s music, I was on the edge of my seat at times, not knowing how the band will take their sound in the years to come.

If you’re very new to Magenta, then the 20th anniversary double CD/DVD release is your introduction to their music and history as one.