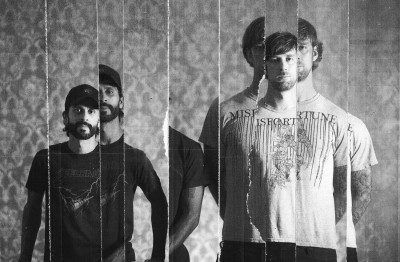 Basically, we just wanted it to crush as hard as it could and be as fearless and weird as possible. I'm really happy with how it all came together

Canadian grind/doom duo Greber have just brought out their new album Fright Without and it sees the band blast through ten tracks of disorienting noise that delights as much as it stuns. Gavin Brown caught up with Greber vocalist/bassist Marc Bourgon to talk about Fright Without and other topics including working with Kurt Ballou, live shows and his time with fellow Canadian grinders Fuck The Facts.

E&D: Your new album Fright Without has just been released. What has the reaction to the album been like so far?

Marc: Hey Gavin! So far the reaction has been really good! A lot of people have pre-ordered copies of the record and seem to be enjoying it. Our hearts are full with all the support that we’ve received with this release for sure.

E&D: Was creating and recording the album a smooth process?

Marc: Creating the record was pretty smooth and recording was also fairly seamless. We recorded the drums at Boxcar Studios in Hamilton, Ontario with Sean Pearson at the helm and I recorded the bass, vocals and other odds and ends at our jam space. It was mostly tracked in April of 2020 so there were definitely some pandemic-related safety measures that we took to make sure that none of us got the Rona. Good times.

E&D: How did it feel to have Kurt Ballou mix Fright Without?

Marc: Man, it felt awesome to have Kurt do the mix on this record. He is a lovely human who is super easy to work with and really took the time to get to know what we were going for before he worked his magic. We have always wanted to work with Kurt and this was nothing less than a dream come true for us.

E&D: Who else did you work with on Fright Without and what did they bring to the album and its sound?

Marc: Mathieu Vilandre, whom I played with in Fuck the Facts, did some clean guitars at the end of Larkinitis and they were a really gorgeous addition to that piece. Also, our good friend Kevin Keegan lent his pipes to the end of Fabricated Purpose and that also helped to bring that song to a new level. Our friends are super talented and we’re honored they took the time to help us out.

E&D: What did you want to achieve with this album musically?

Marc: Basically, we just wanted it to crush as hard as it could and be as fearless and weird as possible. I’m really happy with how it all came together and I feel like it’s a beautiful Polaroid of where Steve and I were at the time.

E&D: Do you feel that this is your heaviest album yet both sonically and lyrically?

Marc: I do, 100%. Between Kurt’s mix and Brad Boatright’s mastering of the audio, it is the heaviest we’ve been able to achieve to date and lyrically I found this to be the rawest and upsetting for myself which I regard as an objective win.

E&D: As well as being extremely heavy, there is definitely also a sense of huge variety with your music including a keen use of melody. Is this your most diverse album to date?

Marc: I’m not sure if it’s our most diverse album to-date as we tend to keep it pretty all over the place most of the time. I’m sure that our next one will have more melody and more variety as I feel like we’re running out of bass and drum parlour tricks to employ.

E&D: This is your first album in four years, so you feel reenergised with this new record?

Marc: Yes and no. I feel more relieved that it’s out as it’s been, as you stated, 4 years in the making. Making records is a lot of work for us, maybe more than it should be. We try really hard to make things as close to what we’d like them to be as possible and that takes a lot out of you. I feel like we will be more reenergized once it’s been out for a little bit and we can start writing some new material.

E&D: How did Greber get together as a band in the first place?

Marc: Steve and I used to play in a chaotic metal band called Tugnut and when that band ended in 2006 we decided to just keep hanging out and playing music together.

E&D: How have your recent record release shows gone so far?

Marc: The release shows have gone awesome so far. We’re blessed to know many lovely humans who play in sweet bands and also come out to the shows and that helps a lot in making us feel less stupid being musicians who are pushing 40.

E&D: Have you been playing the new album in full at all or just certain new songs?

Marc: Mainly just certain new songs. We always try and have a diverse spread of songs from different releases and try and switch it up as much as possible. We take a decent amount of time sorting out sets as they are likely to be played for a long time. It would be sick to be one of those bands who just throws in songs here and there but fortunately/unfortunately, we are not that band.

E&D: What have been some of the best live shows that Greber have played so far and what makes them stick in the head?

Marc: We played one of the last Doompalace shows in Kitchener maybe 6 years ago and that show was quite possibly the funnest I can remember of all time. It was a small basement and people were falling into Steve’s kit and onto my pedals and it was nothing short of heaven. RIP

E&D: What have been some of the most memorable moments in your time with Greber so far?

Marc: I would have to say our Europe tour a few years back. We did it with our friends in Humanity is a Curse and also brought our good friend Kevin along with us for the ride. Easily, it was the best tour I’ve ever done. The shows were great and we just had a belligerently fun time with our friends.

E&D: Do you look back on your time with Fuck The Facts with fondness?

Marc: I do for sure! There’s a part of me that thinks those were the best years of my life touring around with Fuck The Facts. We were a well-oiled machine and just had so much fun the whole time. I always found that in playing music it’s really important to be in bands with people whose company you legitimately enjoy and can hang around endlessly and laugh about the dumbest stuff.

E&D: Who are some of your favourite ever musical duos?

Marc: I would have to say Donald Fagan and Walter Becker are my favorite musical duo (Steely Dan) but a close second would be Lightning Bolt or maybe Gang Starr.

E&D: What is next for Greber for the rest of the year and heading into the new year?

Marc: Just aim to play a ton of shows with this release and maybe start writing some new material in the new year. I’m notoriously bad for taking on too many things and not finishing any of them so we’re aiming to do a one-thing-at-a-time type deal this time around.