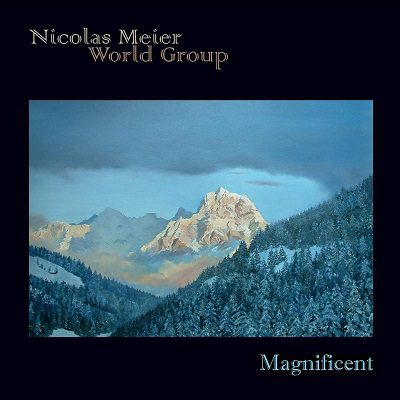 When you think of the guitar players that might perk your interest from the realms of Michael Hedges, Ottmar Liebert, Terje Rypdal, and Bill Laswell’s collaborator Nicky Skopelitis when he first worked with him on his 1988 release, Hear No Evil. It’s always a deep dive to see what you’re missing from these amazing artists who would take their instruments to a whole other level. But when it comes to Nicolas Meier, you know something special is about to happen.

Nicolas is a Swiss musician currently based in England. A Berklee alumni, he has toured with the legendary Jeff Beck for five years and made four studio albums with Peter Oxley. Then he recorded and toured with Dewa Budjana (Flying Spirits) on the Blue Canoe label and recorded his 2016 album Infinity with drummer Vinnie Colaiuta and bassist Jimmy Haslip which was released on Steve Vai’s record label, Favored Nations.

Then he decided to form the Nicolas Meier World Group which considered bassist Kevin Glasgow, percussionist Demi Garcia Sabat, and violinist Richard Jones. With the release of Peaceful, it received excellent reviews and feedback as they did a 55 date tour promoting the album. That and this 3-CD bundle containing three releases; Magnificent, Stories, and Live, showcases the World Group by taking listeners to parallel worlds with a lot of inspirations that’ll make our earphones spellbound.

Magnificent is music taken from travels from the realms of ethnic music from; Spain, Turkey, Balkans, Middle-East, and Northern African arrangements with a modern jazz approach. The second disc was recorded two years ago on February 16th at the Colchester Arts Centre Jazz Club in the U.K. prior before everything came to a screeching halt in March due to the pandemic performing music from Peaceful. And the third disc tackles beautiful takes from Edith Piaf, Jazz standards, Charles Mingus, Metallica, and Charlie Parker to name a few.

From the hypnotising middle-eastern atmospheres of India, Nicolas transforms his guitar into a sitar by travelling on boat from the rivers of Godavari, Ganges and into Narmada, he and the band give us an insight by telling us ‘Stories from the Garden.’ It has some meditated atmospheres as Jones’ violin sets up this beautiful exotic arrangement between Nicolas and Demi whilst Glasgow cools it down for Richard to see the sun go down.

Then the group walk into the territories of tango between ‘Manzanita Samba’, City of the 3 Rivers’, and ‘Villa Olivio’. Once they go into the tango, it becomes an intensive dance to the finish line between two people hitting it on the floorboards until the crack of dawn with a flamenco twist that’ll have your jaws dropped to see what the band would think of next.

But its Nicolas giving the band a break as he breaks out the heavy swinging momentum for the rain to come down with ‘Blues For Alice’, ‘Night & Day’, and the gentle turned 12-bar wah-wah blues groove of ‘Goodbye Pork Pie Hat / Brush with the Blues’. Meier knows his inspirations very well and where the history of Jazz came from. The thing what makes it great is that he would take these different genres and go from one door to another and see how he would interpreted the compositions.

And it’s like creating a magical spell being brought to life. But once he brings the house down at the Club in the River suites on ‘Riversides’, ‘Princes’ Islands’, and the ‘Water Lilies’, the audience becomes in awe of Meier will do next. One is the nod to ‘The Talking Drum’ section from King Crimson’s Larks Tongues in Aspic-era, the soothing cry to the gods and witnessing those beautiful landscapes with stunning imagery before returning back to the Liebert-sque sounds with a Gershwin vibe.

These three albums are quite a trip to see what he’s been doing. And it is both a sight to see and hear what the quartet will think of next. So if you’re very new to Meier’s music, then this triple bundle is a perfect introduction to see what you’re missing. As Bette Davis once said in the 1950 film All About Eve, “Fasten your seatbelts, it’s going to be a bumpy night.”