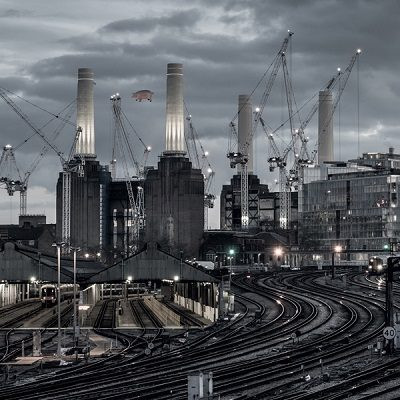 Was the four year delay worth the wait? Yes, we can all agree that both Roger Waters and David Gilmour are very good on not burying the hatchet. It’s very hard to see these two men arguing not just what you read in the magazines, and making it almost like the Jerry Springer show at times, but you can’t deny the genius of what Pink Floyd had accomplished for the past 55 years since releasing their 1967 debut, The Piper at the Gates of Dawn.

Now in the year 2022, the wait has finally been pulled with the 2018 remix of the band’s darker masterpiece, Animals. Originally released in 1977 on Harvest (UK) / Columbia (US) during the peak of the punk movement, the Orwellian universe has come back for more vengeance and what is happening right now during these tricky times that we’re living in.

Some might argue that Wish You Were Here was the last real Pink Floyd album before it delved into arguments, madness, and clashing with each other between The Wall and The Final Cut periods, but Animals was like looking through telescopic lens and viewing the bleak world that has a dystopian landscape that isn’t all rosy and sweet, but hell on earth.

Waters’ lyrical views of the good, bad, and ugly, paints a big massive picture of corruption, greed, censorship, and religion. He brings the views of the Pigs, Dogs, and Sheep right in front of you that the human race at times, act like a bunch of damn fools that you see on TV now, arguing between the left and right on CNN, FOX News, and MSNBC. And believe me, they can be very crazy.

For James Guthrie’s remix of the album, Animals has been reborn again. Yes there will be a dividing line in the sand among Floyd fans who will prefer this mix or the original 1977 mix, but let’s not get into that.

On ‘Sheep’, you can hear more of Roger’s shouting at the end of each lyric that you didn’t hear in the original mix which I thought was interesting and never heard before. And there’s some clearer lines in Psalm 23, King James’ Version, makes it much better to hear than the muddy sounds in the ’77 mix. He can really transform into a mad scientist as he goes into those antics by bringing it all of these various forms, out to the record.

The 17-minute epic ‘Dogs’ is more terrifying from its original release to today as the corruption of the big corporations start to become more disturbing than ever before. Not only David’s brutal solo section brings a lot of attitude, betrayal, and cries for help, but Richard’s ambient keyboards with dogs barking and howling, has sense of decay throughout the entire city, not knowing who will come to save who. And getting out, is the hard part.

The 2018 remix is quite a treat that has taken me a front-row seat of the Floyd’s electrical theatre. I wasn’t quite sure on what to expect after being very disappointed with the remixes of both Obscured by Clouds and A Momentary Lapse of Reason, but Guthrie’s remix of Animals as I’ve mentioned earlier, is out of this world.

You might want to play this album if you have a big 5.1 surround sound at your house, or driving in your car from home to work. Animals is the album that we need for the right place at the right time in the roaring ‘20s.