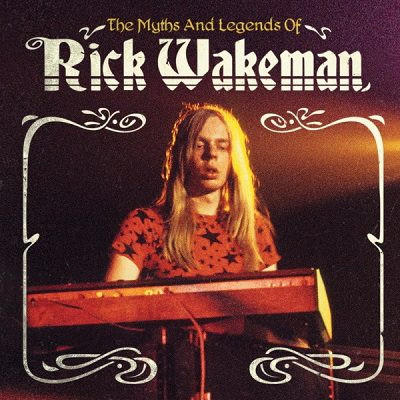 Rick Wakeman was and still is to this day.one of the true maestros of the keyboard kings during the progressive rock movement in the 1970s. After he left Yes with the release of their misunderstood opus Tales from Topographic Oceans, he embarked on a solo career. “The 1970s were the glory days as far as I am concerned.” He said in the liner notes, “Financially, I always bit off more than I could chew. But never musically or production-wise. If something had to be done, I did my best to make it happen.”

For Rick, he pushed the envelope as far as he can go during that time frame. Bringing in unknown vocalists and musicians, symphony orchestras, narration, and his massive keyboards, he knew how to bring in the stories to life with music. That and this 4-CD set containing live recordings from 1974 to 1976 showcases a man’s journey through the Centre of the Earth, The Myths and Legends of King Arthur and the Knights of the Round Table, and No Earthly Connection.

First is the two live recordings on CD 1 and CD 2 are the 1974 North American tour and the performance at the Winterland Ballroom on November 2nd, 1975. There is the full-length two part epic of Jules Verne’s ‘Journey to the Centre of the Earth’ with Terry Taplin handling the narration throughout the Journey tour. Then, Rick goes into a synthesised attack with Newell’s bass lines, Barney’s attacking sections from his drum kit, and Crampton’s funkified guitar grooves over the second wife of King Henry VIII’s, ‘Anne Boleyn’.

Mellotrons galoring, concerto piano sections, and unexpected changes, it becomes a climatic piece of beauty for the choir laying down the mournful rite of Anne’s tragic demise. Then it becomes a fanfare waltz mixed in with some tidal waving drum work revealing the true figure of Henry’s fifth wife, ‘Catherine Howard’. Flamenco midsections channeling Mason Williams, fill the Ballroom with excitement as you can imagine audiences quieting down witnessing Crampton setting up the classical and ragtime clap-along rawhide momentum to get them on their feet.

But it’s into the battlefield between ‘Sir Lancelot and The Black Knight’ as keyboards and orchestra duke it out in the boxing ring with Newell’s snarling, monster-like vocals setting up the scenery as Wakeman goes into a full-scale assault on his moog’s witnessing Lancelot putting the last blow on the Knight himself. Then, we go into meeting the King and his wife, ‘Arthur & Guinevere’.

Rick is a one-man keyboardist by playing both the mellotron, moog, and piano setting up the introduction to King Arthur, a leader of the Celtic Britons from battling against the Saxon leaders in the late 5th and 6th century. Then it goes into a romantic side by introducing the love of his life before thunderstorms pail down the galloping swirls once more of ‘Merlin the Magician’.

CDs 3 and 4 is a return back to England at the peak of when Prog was under attack from the Punk movement in year ’76. For Rick he returned home and did two gigs the following year. One at the Hammersmith Odeon on June 17th, and at The Maltings in Farnham which was broadcast and introduced by “Whispering” Bob Harris from the Old Grey Whistle Test on April 27th. The fourth part of ‘Music Reincarnate’ entitled ‘The Realisation’ sees Newell transforming into the styles of Arthur Brown’s operatic vocal arrangements from his Kingdom Come years with blaring horn sections, Italian prog momentum of Murple’s Io Sono Murple, and ending in a Keith Emerson eruption from the Hammond. But it’s the third part of ‘The Spaceman’ from the third part where everything goes into the milky way.

The vocals and mellotron make the jump to a different planet, witnessing something has gone wrong before getting down to Clavinet town that would have made Kerry Minnear very proud of what’s happening from the Hammersmith tapes. Mind you, most of these recordings are rough and had been previously “bootlegged”, but Rick being Rick, he brings it to the forefront.

Yes, he might have gone overboard from bringing The Knights of the Round Table on Ice at the Empire Pool, but that’s not what this about. What it is about from this box set is the recordings from the live shows is how much he was so far ahead of his time. But it’s time to give him another chance by bringing the Myths and Legends of a maestro who took us to the Centre of the Earth, meeting King Arthur and having no Earthly connection to bring his stories to life again.

So it’s time put on you wizard’s hat, cape, dust off your story illustrated books, and prepare for Wakeman to take you on another epic journey, you’ll never forget.

Now, where did he put that Lemon Curry he had during the Topographic Oceans tour?