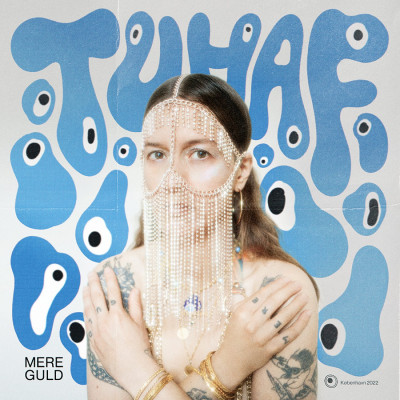 How do you create the sound of the ‘classic’ Turkish psych of its seventies prime these days in Western Europe and make it sound new and fresh?

Danish/Turkish quintet Tuhaf seem to have the solution on their first full-length album Mere Guld (More Gold in English), with a previous EP ‘Gölgeden’ (2019).

It all started out for them back in 2013 when Berrin Bas (vocals), Kristian Haarløv (guitar), and Mathias Findalen (bass) began playing as amateurs, adding on Mads Bendsen (keys) and Rune Lohse (drums) in 2020.

To get the feel and the sound of a certain very specific genre you need to get deep into it, so the band started out doing covers of the original Turkish psych for a few years, assimilating and experiencing the sound to be able to come up with something more personal but still rooted into the sound they wanted to create.

Bringing a ‘classic’ sound of sorts to the current musical scene needed a personal touch and it seems Tuhaf found it in vocalist Berrin’s love for 90’s trance, but also for that prime 4AD sound of the time, s evidenced in songs like ‘Nattesygen’.

And the sound Tuhaf creates on ‘Mere Guld’ works as it is quite a successful combination of the inspiration from two seemingly disparate musical genres. But, then, anything in music can work if you know how to do it.