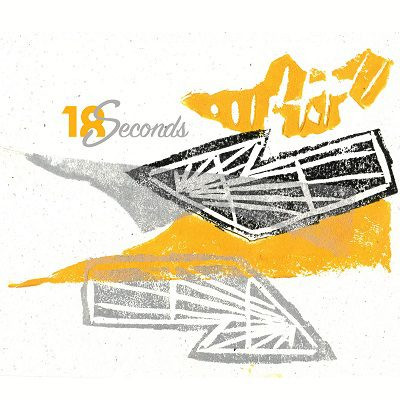 Pascal Normand is not your typical guitar player from Montreal, he brings a passionate unique form of pedals and sounds to his instrument. For his project with 18 Seconds, he goes beyond the emotional boundaries of imagery and sonic alchemy from the worlds of Godspeed You! Black Emperor and the Smashing Pumpkins.

Nearly ten years ago, he released his first EP entitled When Fog Dissipates. Now in 2022 he released a new EP entitled À l’ombre des cyprès (In the Shade of the Cypresses). In it, Normand takes listeners on a 5-piece navigation to the anxiety of agitated waters, fear, anger, and bringing along the themes of the pandemic, wars, and climate change, those pieces become like a ticking time bomb.

The opening ‘Sur mon corps pousseront des arbres’ (On My Body Will Grow Trees) becomes a minimal epic-like intro envisioning of what the future will be in the years to come. There’s the blaring guitar sounds, taking us to the Space Ritual-era of Hawkwind meeting Ennio Morricone’s Man with no Name trilogy, to the mystic caves of Göttsching’s arrangements with ambient waves for ‘Your God is Black and Green’ paying tribute to an extended version of Ash Ra Tempel’s ‘Traummaschine’.

‘For Gene’ brings a sense of calm and relax for Pascal as he visions a mournful loss of a true friend that has got his back for many years and always gave him advice on where he wants to go next with his career in music. ‘Je suis la poussière dans ton troisième oeil’ (I Am the Dust in your Third Eye) brings in the heavenly choir with a Jane Siberry and early Floyd approaches from the Ummagumma years.

The EP closes with ‘Jeux de mains, jeux demain’ (Hand games, games tomorrow). It leaves us in a setting of a destructive aftermath from all of the riots that happened last night. And throughout the situation, it becomes a ghost town. And the question of peace lies in the balance. And the signal for that, will become a long approach in the years to come.

Menacing, underlying, and passionate vibes, Pascal has brought in those effects like a blooming flower ready to reveal its true power on what’s happening right now. And the constructions that’s on here, is the hidden gem we need to explore.